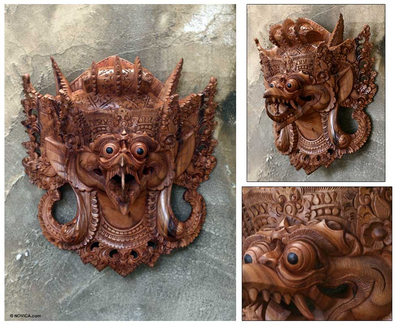 (60)
Garuda is the eagle god who travels between heaven and earth. His image is very... more

Garuda is the eagle god who travels between heaven and earth. His image is very common in Balinese cremation ceremonies. Legend says that two gargantuan underworld serpents enslaved the Garuda. When he broke free, he flew directly to the heavens and became immortal.

This mask is made of regional suar wood.

The detail of this cannot be understood until it is seen in person. The gift was for my tattoo artist as a thank you. Big burly guy had to wipe his eyes, the piece overwhelmed him. 10 stars!

This Wood Carved Ganesha is one of the most beautiful pieces I own. The detail is absolutely beautiful. For the price, this is hard to beat. The artist is truly masterful. I highly recommend buying from this artist!

This is my second Buddha Head; the first one ended with my brother who had fallen in love with it. Thank you for this beautiful treat!!!!

What amazing craftsmanship. Congratulations to the artist. I ordered this for a friend and it was a was delivered extremely well packaged. After receiving the Ganesh and presenting it to my friend, i just may order one for myself. Absolutely beautiful.

"beautiful on my mantle"

really stands out and shows off the living room mantle

You can find our wood mask 'Garuda' by Nyoman Subrata in masks categories such as Cultural Masks and Wood Masks. Enjoy exploring these sections for other Novica treasures.

The artistry of I Nyoman Subrata has been featured in dozens of periodicals in Asia, Europe, and the U.S., and on PBS television.