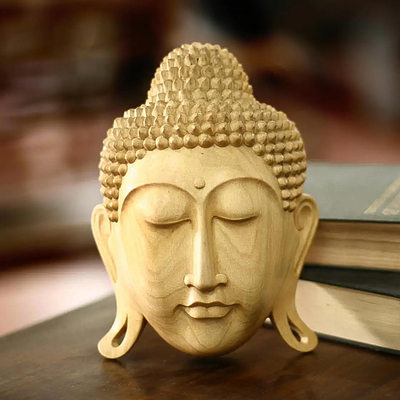 Using crocodile wood, Nyoman Indrawati Subrata of the Subrata Family depicts Buddha in a state of eternal bliss. The smooth, symmetrical features radiate intense spirituality and a soothing sense of tranquility. This superlative mask is carved by hand. The artisan carries on the extraordinary art work of her late father, Nyoman Subrata.

Beautiful face carving. Wish it were bigger, but its still an eye catcher

The beautiflul carving on this cross is reverent and inspiring. I marvel at the talent involved in creating this piece.

"Just the best of the best!"

Superb craftsmanship and exceptional service. My Bali collection is right next to me by the window in the office. I look at them many times during the day and evening

This is a treasure! More elegant than I ever expected.

"I absolutely adore this Goddess ??"

Words cannot do justice to this stunning masterpiece... it is beautifully made and extremelly detailled. You can feel the love and dedication that was put into creating it and I love the special energy the Sarasvati Goddess radiates.

"I will… continue my father, Nyoman Subrata's work to keep his name remembered as a great artisan. I will carry on what my father started."

Master wood-carver Nyoman Subrata was one of Novica's first artisans. Sadly, he passed away in 2020. His daughter, Nyoman Indrawati Subrata, honors her father by continuing to create his designs to perpetuate his artistic tradition.

"I was born in Gianyar, Bali in 1982 with given name Ni Nyoman Indrawati. I was born into a traditional family that lives by way of our cultural inheritance. My father was a master wood sculptor and had been carving from a very young age. I used to help him finishing the sculptures he had done.

"My childhood was awesome. I always went to school and, after that, I helped my father. When we were on holiday from school, I also spent many days helping him. He began teaching me how to work with woods and the necessary tools when I was in elementary school. I learned how he began by choosing the best wood, making the design and also finishing the sculpture.

"After receiving my college degree, I began to work in a gallery and even helped out as a packer. After some time, I decided to help my father since my other siblings had their own jobs and I thought it would be good if I helped my father. Eventually I became his right hand.

"My father worked with NOVICA from their early days. We got so many insights from NOVICA — how to make our sculptures better, to maintain the quality and to make sure our customers were happy with our work. I used to take care of the NOVICA orders until they were finished.