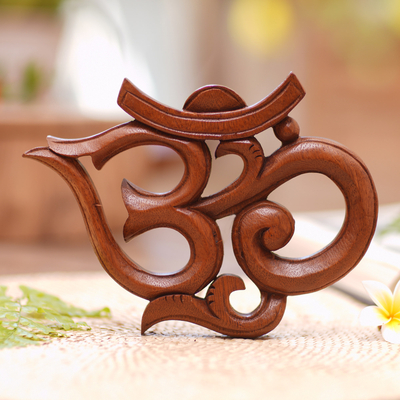 (197)
Hand-carved from suar wood, the curvilinear om symbol is embellished with... more

Hand-carved from suar wood, the curvilinear om symbol is embellished with trailing vines. Om is one of the sacred sounds of Hinduism, included in mantras across several meditative traditions. Designed and hand-crafted by Balinese artisan Seji Taram, this wall relief is a reminder of the universal within us all.

"Breathtaking artwork on our wall"

This is now my husband and I s favorite art piece in the house. What an unbelievably gorgeous piece of work. The photos online honestly didn t do it justice... the richness of the wood and the carving don t come through in photos like they do in person.

This just adds a nice touch to my Family room. Keeps me centered and facing forward.

Just beautiful ; The wood crafting beyond this world and into the next. It gives me great peace.

I know he"s in a better place he's smiling.

"This is a loving art"

It s a beautiful piece of art. Love it thanks

"This is a beautiful dragon"

I bought this dragon for my boyfriend as a birthday present, he absolutely loved this dragon, the graftmanship is beautiful!

"added an ornate touch to my wood desk"

Well carved and a great size. Nail on the side or front of your plain furniture. Or above a plain shelf. Very versatile piece.

Today, Seji is a strong female figure who heads a successful carving workshop. But in the days after her husband died, this future was far from guaranteed. With the carving skills she learned from her husband, Seji embraced her new reality with determination and commitment. As a result, she has not only been able to provide for her son, but now employs several other female artisans in her workshop.

Seji learned to carve from her husband. Sadly, he passed away and she was left to support herself and two children. Before he died, her husband urged her to be strong and become her own woman. She has done so and has grown their workshop. She now gives work to other carvers, and two women hand-finish the sculptures.

Seji learned to carve from her late husband. Their workshop continues to produce his designs and also the ones Seji has developed. She teaches her assistants to carve and carefully instructs her finishers in how to refine each detail of the sculptures.

Novica sales provide Seji with a steady income that has enabled her to grow her workshop. She is able to not only support her son but to provide steady wages to her workers, enabling them to support themselves and their families.

Seji Taram has received 5 microcredit loans with 0% interest from Kiva and Novica, the first for $1250 and the most recent for $2500. Proceeds were used to hire people to help in his workshop.

Since the death of her husband, Seji has not only survived — she has managed to thrive. She has grown her workshop and is now able to offer work to other artisans in her community.

Seji Taram is a widow. Her daughter is grown, Seji is raising her young son alone.

Seji is determined to give her son the best possible education.

"I'll always remember what my husband said before died, he wanted me to carry on caring wisely for our children, and he also encouraged me to be a stronger woman for our children's sake."

It is with a very heavy heart that we mourn the death of Ketut Taram from lung cancer. "He was the best man I ever knew, and the best husband I could ever hope for. He always made me feel loved. He was always gentle and caring, especially with our children — he never got angry and always had a great capacity for understanding," Seji his wife told us. A Novica friend and artisan, he will be much missed by all of us.

"My name is Ketut Taram and I was born in the Gianyar regency, Bali, in 1967. I learned how to create my first sculpture from my older brother, Made Mudiawan. From 1975 until 1990 I worked primarily in suar wood. Then, from 1990 until 2000, I made the sculptures from sandalwood. Lately, I enjoy sculpturing with both.

"I began carving on my own in 1992; before I'd worked together with my older brother, saving until I had enough money to open my own workshop. There are five people working with me now.

"Balinese culture and tradition inspire my artwork. As the son of Wayan Kicen, a wood carver, it is easy and enjoyable for me to transfer my imagination into my work.

"I have participated in several exhibitions around Bali. Thank you Novica for promoting my artwork to the whole world. Through my art I do hope to provide a good life and a better future for my family, especially for my children."

Always happy and smiling, Taram's carving legacy will be continued by Seji, who says,

"I met Ketut Taram when I was 19, and we were married three years later. He was a very quiet man, very kind, didn't talk much, and cared very much for me and our children. He didn't tell us he was serious ill because he didn't want to make us sad or worry us. He only told me three months before he passed away.

"We have a young son and an older daughter. They inspire me and motivate me to make sure I can give them a better life until they graduate from university. But it has been difficult since my husband passed away – I try to fill my day with different activities, working hard.

"I'll always remember what my husband said before died, he wanted me to carry on caring wisely for our children, and he also encouraged me to be a stronger woman for our children's sake.

"Being associated with Novica has really made our situation easier, before and after my husband passed away, because we only focus on orders from Novica customers. We sell most of our products via Novica and from that we can pay for food and also our children's school fees.

"I learned this art from my husband, and now I continue to craft his designs, sometimes with Novica's advice on how to improve and create new designs from my own ideas. I hope my hard work will make our products sell more, and that Novica customers like my new designs."
View all