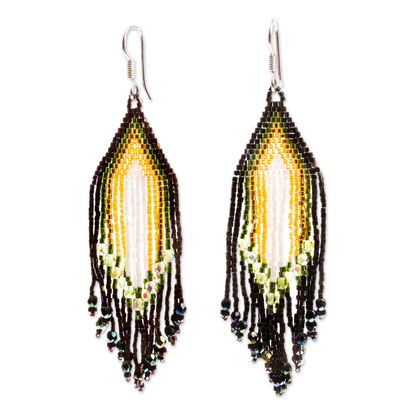 (2)
Rivulets of spring green, yellow and golden brown flow together with white and... more

Rivulets of spring green, yellow and golden brown flow together with white and espresso. They evoke a wide river of colors more than three inches long. By skilled artisans from Mexico's Huichol Center for Cultural Survival and Traditional Arts, these dramatic waterfall earrings make a bold fashion statement. The lovely cascades of seed beads dance on sterling silver hooks.

"My wife loves it"

The bracelet glows and Wixáritari (Huichol) origins give it even greater meaning. My daughter loves it. Thank you!!

You can find our glass beaded waterfall earrings 'Espresso and Yellow Rivers' by Huichol Center for Cultural Survival and Tradition in jewelry categories such as Cultural Earrings, Folk Art Earrings, Geometric Earrings, Huichol Earrings and Glass Bead Earrings. Enjoy exploring these sections for other Novica treasures.

The Huichol Center enables educational opportunities for their members.

"Our goal is to preserve the beautiful traditions of the Huichol people through crafts, spiritual practices, training for families, medical assistance, and Indigenous education."

The Huichol Center for Cultural Survival and Traditional Arts is a nonprofit organization based in Jalisco, Mexico, that supports the endangered Wixárika (Huichol) tribe through language education, ethnographic documentation, and traditional craft production. It was founded by anthropologist Susana Valadez in 1996.

"The Huichol arrived in the area of Barranca de Bolaños after the Tepecanos or Tepehuanes arrived. Tepehuana oral history affirms that some populations currently inhabited by Wixárika, such as Santa Catarina, were inhabited by Tepehuanas in the past.

"The Huichol people are one of the oldest indigenous communities in Mexico. Its population can currently be estimated at around 44,000 people, who live mainly in the center-west of the country, in some areas of the Sierra Madre Occidental (Sierra Huichola) between the states of Jalisco, Nayarit and Durango.

"In Spanish, they are known as Huichol, a word possibly derived from the term with which they were named in the Nahuatl language spoken by the Aztecs. But in their own language—which they keep alive like a treasure—they call themselves Wixárika (pronounced virárica.) The Huichol (or Wixárika) people are widely recognized for having preserved their spiritual identity and for continuing to practice their cultural and religious traditions for thousands of years.

"Our goal is to preserve the beautiful traditions of the Huichol people through crafts, spiritual practices, training for families, medical assistance and indigenous education.

"Among their spiritual traditions is the ritual collection and consumption of peyote, a hallucinogenic cactus in the place they call Wirikuta, located in the Real de Catorce region, in the state of San Luis Potosí. Peyote does not grow in the Wixaritari region, but it is abundant in San Luis Potosí, a territory that was the central domain of the Guachichiles before the arrival of the Spanish. The Guachichiles were recognized as a fiercely defensive ethnic group of their territory.

"Among our projects to promote cultural activities is Creative Hands, which promotes economic self-sufficiency by training Wixárika artists in traditional and contemporary arts. The main mission of the Huichol Cultural Center is to create lasting bridges to the future, by preserving a pioneering tradition of our country."
View all