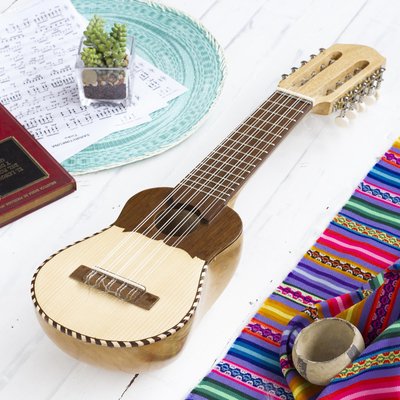 Original and beautiful, this handsome charango combines pinewood, walnut wood and congona wood. The ten-string Andean instrument is a South American version of the European mandolin, originally crafted from the shell of an armadillo. Benito Tito creates this piece to contrast the grain of three local woods. The guitar features nylon strings and includes a plastic pick. It arrives with a colorful woven cloth case.

"I am very excited to learn how to use the pipes!"

I loved receiving my Andean pipes! They were contained in a lovely carrying case and the pipes themselves were meticulously cut and bound together. My only problem is that I do not know how to play them! I was able to get some soft notes out of them which was great, but I clearly need instruction. It would be wonderful if the very skilled artisan, Benito Tito, could put together a beginner?s guide to help someone like me get started. I would be very willing to pay extra for a beginner?s guide to using the pipes written by an expert like Benito Tito.

"Great authentic addition to my home"

My Grandson has already mastered playing it. Beautifully made.

"Beautiful and very well made"

A good Quena but definitely not a professional one. The C hole and the thumb hole are slight to the right compared to the other holes, while it should, if not straight, slightly to the left. Also, the G hole is slight to the left when it should be slightly to the right. The instrument would be a good option to a left person, although it is not totally in tune. The misalignment of those hole cause an uncomfortable playing.

Son loved this for Christmas. He was very impressed with the workmanship and it tunes and plays as expected. Now he just needs to find a way to display. Thank you!

Great piece of art beautiful. Had an issue with order but customer service was quick to fix it. Very pleased with this flute it is functional and working on learning to play it still

For generations, the Tito family legacy has helped to preserve the musical traditions of the Peruvian Andes. The art of crafting musical instruments to produce the haunting music indigenous to this region has been passed from father to son. Benito is now an elder master. He embraces every opportunity to teach younger artisans the vast array of skills required to handcraft a musical instrument and proudly incorporates local materials, such as jungle bamboo, into his designs.

Now in his seventies, Benito has had cataract surgery but now faces glaucoma. Work is more difficult for him but he refuses to give up. The income from the sales of his musical instruments help him care for his wife who can no longer care for herself, pay for his grandchildren’s education and maintain his dignity. He is grateful that the orders for his work have increased since joining Novica.

Whenever Benito has a large order or many orders to fill at the same time, he hires other craftspeople to help him. He especially likes to give work to those who are from his hometown of Puno - he likes to be able to share the income this work brings with others in his community.

Now in his seventies, Benito is entirely dependent upon Novica sales. The income derived from the sales of his musical instruments support him, his wife and his grandchildren. He also gives work to other artisans when he needs help to meet the demand for his work.

As Benito's sales have grown through Novica, he has been able to hire other artisans to help meet the demand for his handcrafted instruments. He has trained many of them in this traditional craft and prides himself on preserving this traditional Peruvian art form.

Now in his seventies, Benito lives with one of his children and their children. Their parents provide for their children's food and clothing and Benito proudly pays for his grandchildren's education, even though he often struggles to do so.

Benito Tito has received a $450 microcredit loan with 0% interest. Proceeds were used to purchase wood, strings and accessories for his musical instruments.

"Aiding in the preservation of our musical heritage is my family's legacy. We have carefully crafted traditional instruments for generations."

Benito Tito, known to his friends as Tito, was born in 1945 in the Huancane province of Peru's Sierra Sur. He is an expert at crafting traditional Peruvian musical instruments. This is a family legacy, inherited from his grandparents and relatives. Curiously, Benito never used this knowledge and innate talent as a young man. He spent his time at other jobs because times were tough and he needed an income.

The artisan lived in his hometown until the age of 14. Life was tranquil but things got complicated when the country went through a very difficult time politically and financially. Benito had to go to the capital to seek better opportunities because he had to support his family, and earning money for day-to-day expenses was crucial.

He worked at a variety of jobs until the young man had the opportunity to work in a government job, which he held for almost 30 years.

However, when a number of employees were laid off, Benito decided to return to his traditions and roots. He decided to take advantage of his knowledge and began to develop wind instruments, mainly of reeds.

He set up a small workshop and began crafting instruments with the help of relatives back home who sent him the materials he needed.

At first, he found it very hard to sell his work. He had to knock on the doors of many shops to show his instruments but eventually, he began to be known. Sales increased when he added beautiful cases for his instruments, utilizing the colorful weavings that are typical in the Peruvian Andes.

With time, his talent became evident. Even the Minister of Culture invited him to participate in craft fairs over the years, which gave him a greater presence in his field.

The artist uses a variety of natural materials to make the different instruments, including bamboo reeds, Castilian cane and goatskin. Every instrument he makes is handcrafted with rustic tools. Among the instruments he creates are the zampoña and quena flutes, the charango guitar, the antara, roncadora, tamasca tambourines, taymuro, and cane ocarinas.

Benito learned of Novica at a craft fair in 2005 and felt an immediate connection. Novica's support was constant and, despite his age, the artisan continues working with the help of his sons who are deeply involved in the workshop. They make it possible to continue with this family tradition.

"Novica lets my work be seen and known outside of Peru," he says. "This is a wonderful opportunity."

Tito is very keen to preserve Peru's musical traditions. One of his goals is to equip his workshop with better tools so he can make more instruments to sell. This will assure a family income.

"Aiding in the preservation of our musical heritage is my family's legacy. We have carefully crafted traditional instruments for generations. My greatest goal is to best provide for my family, and to send my five children to college," the artist notes.

"My family is my most important source of motivation. I want to give them the best example possible. Now I want to show my little grandchildren that, with hard work and love for what we do, we can go as far as we believe we can."

Benito acquired a mastery of his art over the years and plans to share his knowledge with his descendents and with anyone who wants to learn.
View all