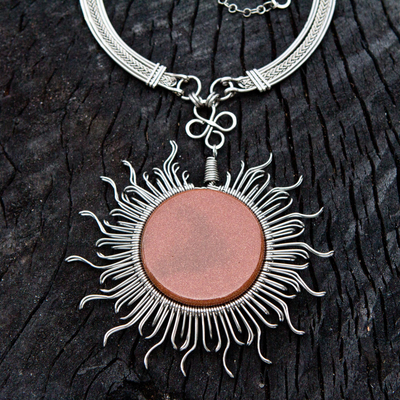 (13)
An elaborate sun-shaped pendant glows orange at the bottom of this statement... more

An elaborate sun-shaped pendant glows orange at the bottom of this statement necklace by Brazil's Ailton Oliver. Featuring a large, round goldstone, it hangs from a variety of chain types made from stainless steel for an elaborate and unforgettable look.

If you are looking for a big and bold piece. This is it. You'll get lots of compliments.

My wife loved this necklace. Great casual accessory for hanging with friends. Lots of compliments.

Opal is my granddaughters birthstone. At a very early age her bedroom at my house has had dream catchers in it so this was something she has always known. Imagine my delight in finding out that I was able to combine the two! These earrings were very well made. So beautiful.

You can find our goldstone statement necklace 'Rays of the Sun' by Ailton Oliver in jewelry categories such as Sun and Moon Necklaces, Goldstone Necklaces, Stainless Steel Necklaces, Pendant Necklaces and Statement Necklaces. Enjoy exploring these sections for other Novica treasures.

"I traveled a lot throughout Brazil to make my work known. A lot of times, I was misunderstood and even humiliated, but I persisted in what I believed."

Born in 1965 in Minas Gerais, Ailton Oliver has had a special interest for art ever since he was a child. He learned to read at the age of five. Books revealed a fascinating world of dreams, where he promised to make his home one day.

"I have nine brothers and sisters," the artisan says. "We lost our parents when I was only 12, and I moved to São Paulo with eight of them. That forced me to grow up fast.

"I was still a teen when I began crafting my first designs. I worked in wood, and tried to portray the facades of São Paulo's outstanding churches. I discovered leather, glass and coconut tree fibers. Then, when I was 18, I took a job in metal works.

"In 1989, I quit so I could devote my time to the arts. Gemstones have always fascinated me, and I integrate them into my designs in a harmonious way that shows them off.

"I initially sold my jewelry in the streets, parks and plazas of São Paulo. As I had no academic formation, I did whatever I could to survive. I learned to create medieval-style chain mesh, metal twists and spirals, and gemstone settings, and I taught all these skills to others, once I had mastered them.

"Finally, I realized that the designer is his vision of the world. I traveled a lot throughout Brazil to make my work known. A lot of times, I was misunderstood and even humiliated, but I persisted in what I believed.

"Since 2005, I've lived in Rio, where I work at craft fairs and in social projects and workshops."
View all