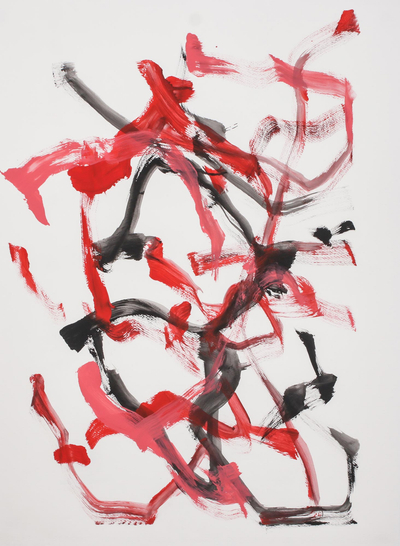 (1)
Releasing a torrent of energy, Nammoey evokes the power of a Thai storm. Bold... more

Releasing a torrent of energy, Nammoey evokes the power of a Thai storm. Bold streaks swirl and disintegrate, forming a vision of trees blown by the wind. Her work conveys the intensity of the young elephant's personality.

Given to my husband in place of the "ivory" anniversary gift, this was a big hit. It's such a conversation piece.

You can find our elephant painting 'Black Forest' by Nammoey in paintings categories such as Abstract Paintings, Elephant Art Paintings and Acrylic Paintings. Enjoy exploring these sections for other Novica treasures.

Nammoey likes dessert and sticky rice with sugar. The young elephant is a skilled painter and also plays the angklung — a traditional Thai musical instrument crafted with bamboo.

Born in 2009, Nammoey is a young female who survived elephant traffickers thanks to the forest officers who work to enforce the Wildlife Preservation and Protection Law. They found her near the Salween River in Sobmoey, Mae Hong Son, and placed her in the care of the Thai Elephant Conservation Center-TECC.

TECC officers named the elephant Nammoey because she was founded on the shores of Moey River, a minor tributary of the Salween. At the time she was only one year old. At the TECC, veterinarians checked her health and fed her milk and vitamins. She received excellent care and lives in a natural environment in order to release the fear that elephant calves usually experience.

Nammoey is the same age as Novica-featured elephant artists Pathomsompob and Pooparn. When they were old enough to attend the elephant training school, TECC celebrated the Wai Kru ceremony for them. Wai Kru is a traditional worship ceremony honoring teachers with a realization of grace. It is believed that each elephant will have an identity angel to protect them and bring them auspicious things in life.

Weighing 2,315 pounds, Nammoey has pink skin and is very healthy. She likes dessert and sticky rice with sugar. The young elephant is a skilled painter and also plays the angklung — a traditional Thai musical instrument crafted with bamboo. When walking to the class courtyard or the show area, Nammoey always holds Pooparn's tail with her trunk because they line up according to age.