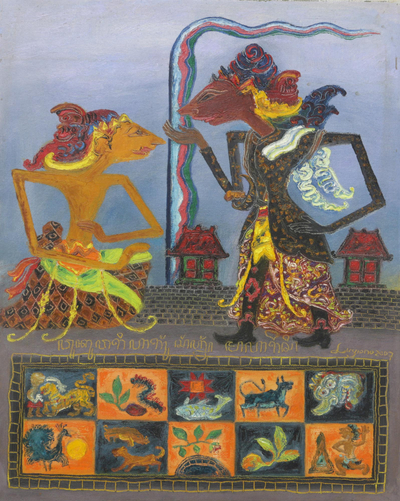 Holding a banner, Maharesi leads his people in this painting from Lugiono's... more

Holding a banner, Maharesi leads his people in this painting from Lugiono's "Wuku" series featuring the wuku's full name written in Javanese script, "Wuku Warigagung Sanghyang Maharesi." The artist depicts his subjects as traditional wayang theater characters. Maharesi was born during the Warigagung week of the Wuku calendar, which suggests that people born during this time are highly responsible, find happiness in old age, are talkative, skillful, and as leaders, their commands are always obeyed.

Developed in ancient Java long before Hinduism arrived, the Wuku lunar calendar includes 210 days divided into 30 weeks or Wuku varying from one to ten days. Each week has a name and number, which can be auspicious or inauspicious, and corresponds to a specific activity. Each week is believed to also describe types of personality according to birth.

You can find our 'warigagung' by Lugiono in paintings categories such as Folk Art Paintings, Cultural Paintings, Expressionist Paintings and Oil Paintings. Enjoy exploring these sections for other Novica treasures.