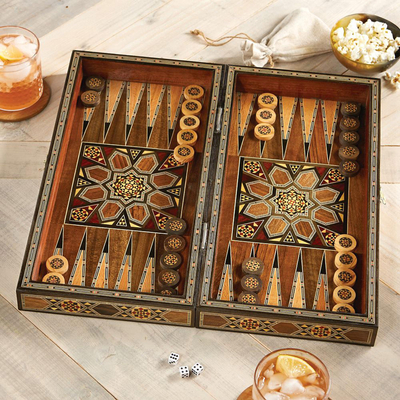 (3612)
Backgammon may be the world's oldest board game. Invented in Mesopotamia, there... more

This item is available for backorder and will ship within 3 to 6 weeks. Read more

This item is available for pre-order and will ship within 3 to 6 weeks. Read more

Backgammon may be the world's oldest board game. Invented in Mesopotamia, there is evidence of it being played in ancient Egypt, Rome, China, Japan, and England. Over the millennia it evolved into today's simple but multilayered game of tiles and strategy. Made by a fourth-generation artist in Damascus, Syria, this game board is handcrafted using hundreds of tiny pieces--called tesserae--of inlaid walnut, olive, lemon, apricot, and rosewood. As each piece is handcrafted, exact colors and patterns of the inlay may vary. Can also play chess and checkers on the reverse of the folding case. Backgammon and checker pieces included.

This is a lovely, even stunning game board. One suggestion: the clasp joining the top to the bottom is inadequate. I should want a clasp that keeps the two together.

My husband gave to me for our 5th (wood) wedding anniversary. Such beautiful workmanship we keep the box on our coffee table when we are not playing. Note that the colors are not as vibrant to the eye as they appear in photos. But still very exceptional and a great gift.

This backgammon board is just as pictured. Beautifully inlaid and finished. You will want to display this as well as play with it.

"This is now indeed, a cherished Heirloom!"

Absolutely blown away by the astounding intricacy of the craftsmanship. Almost to beautiful to use. Truly a work of art and unique conversation piece. Makes the game that much more interesting. Well worth more than the price. I will say however, the plastic dice are far too small. It would be nice to see some 10mm wood dice included or sold separately. Just a thought..Cheers!

I agree with the clasp comment noted on another review, but if storing horizontal its not a huge deal. Mine came with a couple of nicks and chips, but they were small and there is so much detail on this board you would have to inspect closely. Also, I havent counted the spaces, but it looks like when opened the back can be used as a checkers/chess board. Love it.

I love the board, the artist is extremely talented, Beautiful. But, The wooden (stones) pieces are very cheaply made there are chips in the wood and just bad cutting and sanding. The dice are extremely cheap and small. One die has 2 dots where there should be one. There should be no defects with the pieces or the dice for the money paid.

I bout these whimsical little figures for my three daughters to hang on their Christmas trees. They absolutely loved them!

"The Tree of Life is to be cherished always!"

I got this for my sister as a wedding gift and she loved it.... she immediately sent me a picture of it where she hung it at her front entrance! Noting its relevance, I sent it three years later to my daughter and son-in-law, believing that it would be perfect to honor their new home! Lastly, despite the many delays in shipping, the bride and groom I was finally able to deliver it to were so very appreciative of the very thoughtful and unique gift ... something we will cherish forever! The tree of life is meaningful to all who can display it...and I believe it is just the perfect piece for special moments and I know will be appreciated and remembered!

The letters are silver and very nice. I purchased 3 over the years for confirmation gifts, along with a little crucifix to go with the monogram. The necklace itself was on the thin & delicate side, so I purchased replacement necklaces.

Charming and well made.

Nicely made multi-colored cuff. Love the meaning behind the symbols.

"Gorgeous for my back deck"

I was really worried about ordering the many glasses pieces. I neednt have worried. It was packaged up like Fort Knox - each piece lovingly protected for the long global journey. I keep telling people that Novica is the best packer in the world.