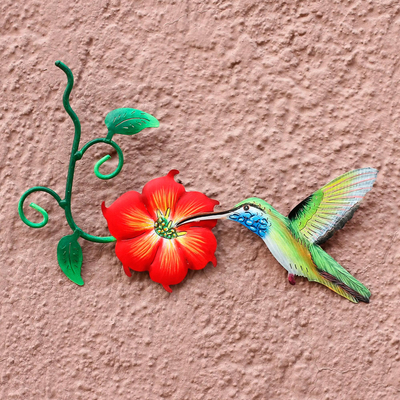 (207)
Bring the serenity of the natural world into your home with this intricate wall... more

Bring the serenity of the natural world into your home with this intricate wall art. Alejandro de Esesarte of Mexico cuts a larger-than-life hummingbird--colibrí in Spanish--and hibiscus flower from steel, then paints them in bright colors. Safe for use indoors or in a sheltered outdoor spot.

Because each piece is individually hand-crafted and painted, size and color could vary slightly.

"This is so tropical!"

The hummingbird is so delicate and highly detailed. It looks very striking anywhere you place it.

The hummingbird is a beautiful addition to our kitchen and dresses up the wall perfectly. The artist has managed to soften the effect of the steel so that the birds feathers and the flowers petals appear lifelike. We are very pleased with our purchase and plan to order more products in the future.

"Gorgouse perfect on our patio"

Muey Bueno,excellentey. Hangs on our wall on the enclosed patio near the hummingbird feeder....

I hung them up in seconds very good hanging ring

The workmanship is so technical and perfect that I am amazed by this piece it brings me happiness when I look at it.

"travel from your armchair"

These Butterflies are truly a work of art. We are very pleased with the entire experience. From ordering to opening the box. The presentation of the art was exceptional. The colors are amazing. We are sure they will last a lifetime. Thank you.

Senor Esesarte, Your artistic skill is obvious in each butterfly! They will land on U.S. Memorial Day as a welcome addition to our patio wall. Muchas Gracias

I have all three of his hummingbirds now! This is the third one. As Lovely as the other two! The flowers seem to get smaller as the hummingbird gets a bit larger ?? in each piece I have received. I personally prefer the larger flowered piece over the larger hummingbird. The colors are vibrant for each one, however that one really stands out! I ll treasure all three of your art and I am a quite satisfied customer. Good work. Thank you once again for creating something that brings smiles in our household.

"Thrilled with the quality"

This metal sculpture is stunning. The color palette is close to the picture. It was lovingly wrapped to survive the shipping from Mexico. There is a very sturdy hook to support hanging the sculpture. I could not be more pleased.

I have added this beautiful piece to my collection of moon/star/sun wall decorations. Nice size!

This is so stunning on your wall and 3 dimensional I absolutely love it. The craftmanship is awesome. I would highly recommend this purchase.

"I am on the autism spectrum. Because of my ASD, I could not hold a job very long. I am totally isolated from people. So I was forced to try to make my own way in order to survive. My only interactions are those needed to make and sell my art. I am obsessed with perfection and beauty, quality and detail in my metal sculptures. Novica found me at a trade show and took me out of poverty. Thanks to my artistic success, I now have economic independence and total liberty. A special thanks to those who purchase my designs. Thank you for giving me my identity and value."

Alejandro de Esesarte has received 4 microcredit loans with 0% interest from Kiva and Novica, the first for $2850 and the most recent for $6000.

"Autism has given me success beyond my wildest dreams… I have economic independence and total liberty. My art is the only connection to the rest of humanity. It is my identity and my sanity."

“I have been working with NOVICA for more than ten years, starting in 2008. This has greatly helped the sale of my pieces. It has an enormous potential.

“I have always been very strict regarding the quality of my work; for me, it is a discipline. NOVICA has been my right hand in keeping my pieces on the market. It represents one of my greatest sources of income, allowing my pieces to be known in many latitudes.

“Dealing with autism has not stopped me from creating more pieces of quality and perfection. My greatest competition is my own self. I like creating colorful pieces that reflect a latent emotion with a pleasing texture. I enjoy seeing my clients feel happy and satisfied that they are receiving a pretty, quality Mexican piece.

“Today, various people work with me and support me in increasing production. This inspires me and gives me an enormous satisfaction.”

"I was born in Agua Prieta, Sonora near the border of Arizona with its colorful flowers. I feel influenced by both cultures but, above all, I identify with Mexico.

"From the time I was a boy, I was attracted to art. My mother painted and I admired her creative ability. I began to draw cartoon characters at first. Later, as I became better at it, I drew animals and plants. I then learned watercolor, which is something I still enjoy.

"When I was 11, I began collecting butterflies. I'd catch them and keep them in a wooden box to exhibit them. When I was 20, I became an ecologist and defender of nature, and this is when I began to create animals in clay and resin.

"In 1908, my grandmother crafted a tray with a metal butterfly. My technique is similar to cutout metal, but more rudimentary. From this, I became inspired and started working in metal for its versatility.

"In 2004, I set up my workshop. I create each piece with my passion for drawing, and seeing the finished work fills me with satisfaction. I am very strict with quality because I'm very demanding in my work. I'm a perfectionist, and demand a great deal of myself because I love to watch people's faces, see their smiles when they see my work.

"A desire to get ahead motivates me. Today I have a workshop, a cockatoo named Coco and a cactus collection. Those are all the tools I need to continue working."
View all