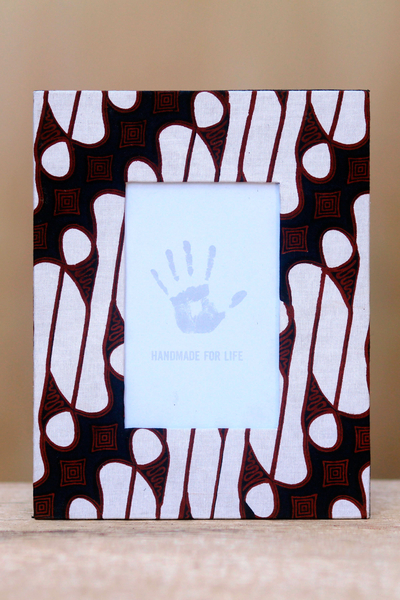 Javanese designer Taufan Redha selects the parang rusak batik pattern for the design of this sleek photo frame. Literally meaning "defective sword," parang rusak originates in Jogyakarta and symbolizes the relationship between humans and their natural environment including animals, plants, seas, rivers, mountains, rice fields and icons of previous ancient lives. Once worn by warriors to show the king the battle had been won, the parang rusak appears in white and brown over black cotton on a frame designed for a vertical or horizontal photograph with a protective glass pane.

You can find our cotton batik photo frame 'Parang Rusak' by Taufan Redha in decor accessories categories such as Batik Photo Frames and Cotton Photo Frames. Enjoy exploring these sections for other Novica treasures.

"I learned that we had better not overestimate the problems we face, just do our best and later we will realize that they were not as difficult as we thought."

"Hello Novica customers, I'm Muhammad Taufan Redha, born in Jogjakarta on April 25, 1993. Jogjakarta is a region in Indonesia that is rich in ethnic culture, natural resources and handcrafts. It also has so many gorgeous mountains and my hobby happens to be mountain hiking: it helps me find tranquility and inspiration for new ideas thanks to the beautiful stars and the view of the city lights at night, as well as the early morning sunrise and the cool and fresh air.

"I am really happy to have grown up and live in Jogjakarta with my parents who are entrepreneurs. They have been making handicrafts, especially pottery, for more than 10 years. My parents are everything to me; they are always by my side whenever I need them offering me their support when I'm down. I have learned from their advice and their past experiences.

"I learned the art of handcrafts from my parents. One day my father asked me to attend a meeting which made me anxious at first, but the meeting actually wasn't as scary as I thought it would be, it ran smoothly. I learned that we had better not overestimate the problems we face, just do our best and later we will realize that they were not as difficult as we thought.

"Now I specialize in photo frames, mirrors, bathroom accessories and home décor. I use easy to find materials such as cotton cloth, glass, and carton and I use manual tools for work. Then I add batik accents to promote our original culture and art, and also to make my items looks different than others.

"I started crafting the products on my own and as orders started coming in I needed to enlist the help of other artisans - now I work with a team of 10! I design and craft the first piece, and they use it as sample to craft more. After observing the artisans' talents and skills I coordinate with them to see who is better suited for a particular type of work.

"I found out about Novica from Regina, Bali's Regional Manager, who came to my exhibition in Jogjakarta and invited me to join Novica. I hope there will be an opportunity for me to expand this type handcrafted products into the global market."