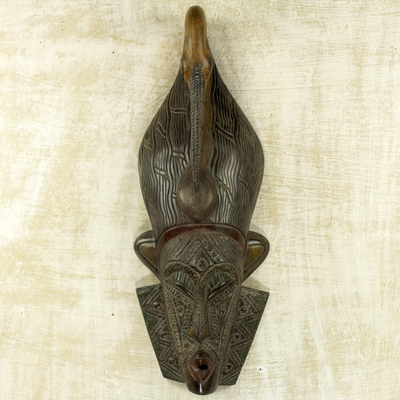 (4)
The Akan word sankofa means "back to my roots" and is the inspiration... more

The Akan word sankofa means "back to my roots" and is the inspiration for this design. This African mask is made from local materials by Ghanaian artisan Winfred Ansah Okoampah. Using sese wood, aluminum plate, and clay, the artist carves and crafts this beautiful piece. This design features the legendary adrinka symbol depicting two symmetrical birds. The artist completes the mask with intricate detailing and patterning, making this the perfect piece to display on the wall.

"So beautiful and sophisticated"

I debated a bit before initially purchasing the mask due to the slightly higher cost, but once I saw it in person I think every cent was worth it. The mask is beautifully done, sophisticated, and makes a stunning centerpiece on one of our smaller walls. The mask itself is pretty large and demands attention. It contrasts beautifully with our white wall and neutral tone furniture.

Back to My Roots, Hand Carved Black Sese Wood Wall Mask with Bird from Ghana

This is a stunning work of art. His colors and design are much more impressive in person. We love him. ?Kobi? means acceptance, providing the perfect way to greet our guests.

I was waiting on this item to arrive and now that it has it hangs gloriously on my wall. Words I do not have enough. The bird that is placed upon the top of the head mask draws a person in to want to see more. I would buy masks made by him again.

"Exactly what we wanted!"

The quality of the masks was terrific! The workmanship exceeded our expectations, and the masks look great on the wall.

You can find our african wood mask 'Sankofa Silhouette' by Winfred Ansah Okoampah in masks categories such as Wood Masks. Enjoy exploring these sections for other Novica treasures.

Winfred Ansah Okoampah has received a $300 microcredit loan with 0% interest.

"I followed a friend who used to visit a craft village and became interested in carving. Since then, I've mastered this craft and trained three people."

“My name is Winfred Okoampah, a wood carver who joined NOVICA 3 years ago. In the beginning, working with Novica was very hectic, because NOVICA quality is top notch and most of my pieces were rejected. But now that I'm familiar with NOVICA's way of doing things, it is much better. It has even translated into my personal works that I sell in my shop.

“With NOVICA, the life of my family has also improved. My kids’ school fees are now well paid, and it has lessened hardship for me and my family. Before, paying my ward fees was painful, but with the sales I make from NOVICA I can access money to pay for it comfortably. My children can now raise their heads high.

“Though I still work in the same place, I have been able to expand in scale with loans provided by NOVICA. I am able to purchase materials to produce new samples in large scale and replenishment. In my workshop, I have employed 2 men who work on a part-time basis when I get large orders.

"My name is Winfred Ansah Okoampah and I was born in Eastern Ghana in 1970. I am a woodcarver. My friends describe me as innocent and serious about work. I hate cheating.

"My dad died when I six years old and it has been very difficult since then. I lived with an uncle who was a farmer. He didn't have enough money to help me to send me to school.

"After I completed fourth grade in 1989, I couldn't continue my education because I didn't have the money for it. I followed a friend who used to visit a craft village and became interested in carving. Since then, I've mastered this craft and trained three people.

"My favorite part about this work is the finishing. The most challenging part is the sanding.

"For my carvings, I find inspiration in my dreams. I use sese wood and acrylic paint. My community benefits from my work by using the scraps from my carvings as firewood.

"A difficult moment in my life was when I fell sick and it took me seven months to recover. I lost a child during that period, but I have managed with the help of God and overcame that.

"A moment that makes me laugh was when a Chinese man came to my shop to buy a carving, but couldn't speak English. We had to negotiate the price by writing on a paper and settled at an agreed price."
View all