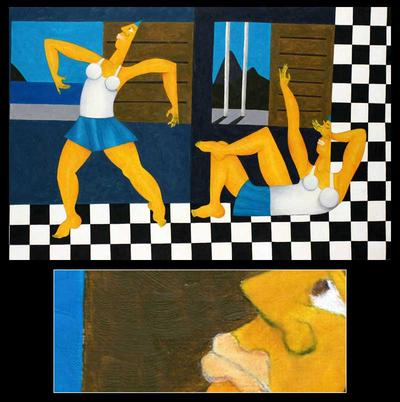 You can find our 'dance in Ipanema' by Teixeira Leite in paintings categories such as Dance and Music Paintings, Cubist Paintings and Oil Paintings. Enjoy exploring these sections for other Novica treasures.

Teixeira Leite's canvases are destined not only to be seen, but also to be contemplated, as their basic material is human loneliness, an impossible communication, the difficult feat of life.

Trained in industrial design, José Roberto Teixeira Leite Júnior is a self-taught painter. Characterized by strong line and bright color, his works are unmistakable. They almost always depict women, observed in profile and frontal views at the same time. They are geometrically schematized, and when not levitating – freed from gravity – their bodies seem to execute unusual movements. They appear as recurring elements in appealing scenes where chairs stand on two or three legs or cross them or meld vases with four or five thin flowers and a chessboard tile floor – everything tied together in some peculiar way, each element with its own vanishing point. This creates ambiguous spaces like dreams.

Figurative and abstracted, subordinated without rigidity to geometric outlines, expressionist, but without rejecting a certain lighthearted touch, the strong paintings of Teixeira Leite are paradoxical in the sense that they also participate in the nature of the design and, inside this, of the caricature.

Whether representing a human figure, a still life, a landscape or the express advancing on rails, a painting by Teixeira Leite will always be, above all, a well defined form contoured through an outline of capricious lines. At second glance, it appears fragmented, disjointed, decomposed in a million colored particles, to finally impose itself on spectator's eye with its expressive content and a sui-generis sensitivity.

Teixeira Leite's canvases are destined not only to be seen, but also to be contemplated, as their basic material is human loneliness, an impossible communication, the difficult feat of life.

Teixeira Leite is one of the great talents of the new generations of painters. Of the same family as Roberto Magalhães, he expresses his feelings and critiques with a fine and sensitive humor.

He is already an accomplished artist with works on permanent exhibition in Brasília. In addition, he has shown his paintings in Miami's Art Fusion Gallery (2007) and in the De Muze Galerie in Belgium (2007). He recently held an individual exhibition in the Cassino Atlântico Ocean, in the Angelina Arts Association where he was awarded first place among more than 120 participants.