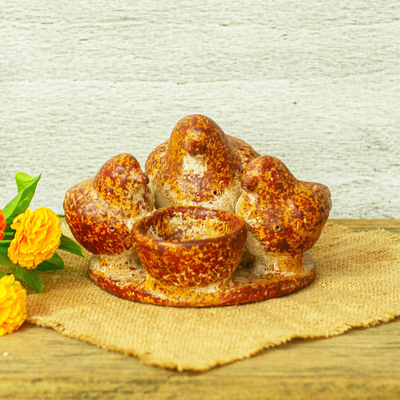 keeping my pens, letter opener and other things at my finger tips

Hoping Jesus Ayon will make some more copalettas. :) They are amazing. Beautiful work and very durable. I got this one for my wife and she loves it. She got me another one, and I use it often.

I like this piece very much. The rustic looks adds to its attractiveness. It looks great in my library

A great addition to my Dancing Dogs collection

You can find our ceramic sculpture 'Three Maya Doves' by Jesus Ayon in sculpture categories such as Archaeological Sculpture, Animal Themed Sculpture and Ceramic Sculpture. Enjoy exploring these sections for other Novica treasures.

"It began as a game, and we all started making figurines until my father deemed we were ready to join the family workshop."

"I have seven children, we're from Jalisco and we are all dedicated artisans," exclaims Mrs. Ayon with pride as she speaks of her son with evident delight. "Jesus began just like his brothers did, by copying what my husband and I made. This is how we learned from our parents and how they learned from their own parents – that's how the family tradition got started."

Jesus Ayon smiles and hugs his mother. He continues:

"Ever since I can remember I've always been involved with the world of ceramics. It began as a game, and we all started making figurines until my father deemed we were ready to join the family workshop. I remember how one day we came upon some pieces, maybe of Huichol origin, which we decided to replicate. One of them featured people holding hands standing in a circle. They were unique and soon became so popular we've continued making them, varying the themes such as with angels, in rows of three, standing in front of a censer, etc. We craft different things, like the big pre-Hispanic masks favored by my brother Ruben."

An aroma of burning wood and clay fills the house as the third generation of Ayon ceramists continues with the family legacy. Their work is well renowned throughout Mexico as well as in France, Spain, Holland, Germany, England, Belgium, Canada and Australia.
View all