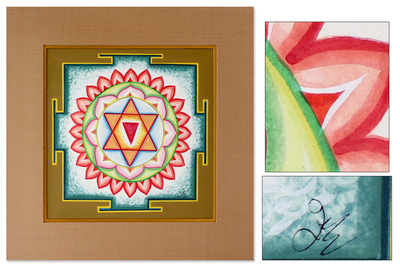 (3)
Conjuring a star within a lotus, Dr. Sneh Gangal paints this yantra in honor of... more

Conjuring a star within a lotus, Dr. Sneh Gangal paints this yantra in honor of Chandi, who is worshipped with the mantra Om Aim. "Chandi is a form of the Hindu goddess Durga, but she is worshipped in this yantra the way Kali is worshipped," explains the learned artist. "As Chandi, she represents Supreme Reality." Dr. Gangal paints the yantra with natural stone colors on ivory paper. The painting is mounted on lined card paper.

Dr. Gangal is inspired by the yantras in Mantra Mahodathi by Dr. Sudhakar Malvaya. A yantra, according to Indian metaphysics, is a geometric representation of energy. According to Hindu Tantras, a mantra is regarded as the ray of consciousness that a yantra represents figuratively. Indian truth-seekers believe that everything in this world represents the abstract energies of a deity, hence every visual phenomenon is a form of yantra. Each yantra has a distinctive pattern that cannot be changed, but which Dr. Gangal embellishes in her own creative way.

You can find our yantra painting 'Chandi II' by Dr. Sneh Gangal in paintings categories such as Spiritual Paintings, Abstract Paintings and Other Paintings. Enjoy exploring these sections for other Novica treasures.

Dr. Gangal recently received the National Award for Traditional Art (2003). This distinction is conferred by the government of India through the Ministry of Textiles.
View all