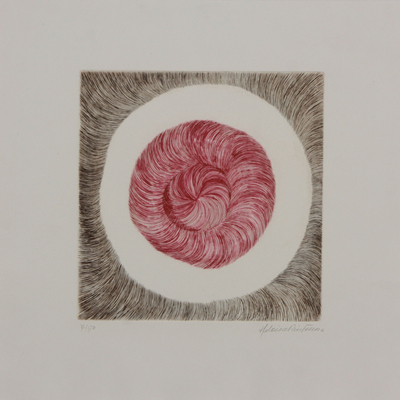 byHeloisa Pires Ferreira
"This is the quiet, enchanted place for my inner sun," confides... more

"This is the quiet, enchanted place for my inner sun," confides Heloisa Pires Ferreira. Mastering metal engraving techniques she creates a red nest within brown borders in a composition of infinite serenity.

Born in Rio de Janeiro, Heloisa inherited from her father, a lawyer and syndicalist, her interest and involvement in social causes and combating injustices during Brazil's dictatorship period. From her mother she inherited a sensibility towards the arts as she watched her design, embroider and sew.

"When I was a little girl I would go with mother to the Santa Teresa neighborhood where she taught women how to embroider," recalls the Brazilian artist.

"My mother always encouraged me to be creative, so I developed original and creative embroideries. I have experienced art in many forms, including theater, corporal expression, and contemporary dance. I also played the flute and I sang in the chorus of the Associação Brasileira de Música.

"I began to teach art in Sao Paolo in 1967 and in 1970 I started working with xilogravure and metal engraving. I studied with renowned artists Edith Behring, Anna Letycia and Mario D'Oglio. In 1979-1980 I won a scholarship to go to Portugal to study at the Fundação Calouste Gulbenkian.

"I've continued teaching in different art schools, and I was a consultant to a team of architect and engineers in the creation of Tijuca's Office of Engraving, which I also coordinated and where I taught for 15 years. During that time I coordinated the publication of a three-volume book titled 'Gravura Brasileira Hoje Depoimento' (Today’s Brazilian Engraving Testimony)."
View all