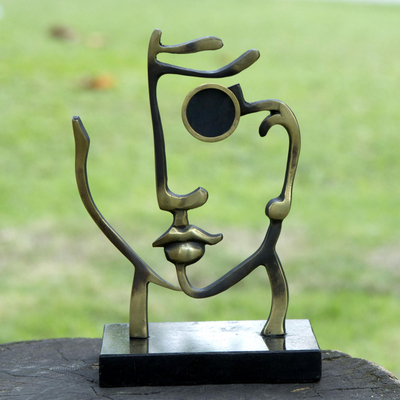 (3)
Ribbons of bronze with an antiqued patina define a young woman's face. By... more

Ribbons of bronze with an antiqued patina define a young woman's face. By Pietrina Checcacci, this elegant design combines fine art with functionality. The eye is actually a petite picture frame for a self portrait or other small, cropped photograph.

I had purchased two other pieces from this artist and decided to add the leaf to my collection. I love it!

"I love this Artisan!"

The agate is absolutely breathing taking and I love the bronze fingers. It is on my desk, so I will enjoy looking at it every day.

I just love this artist work. It is on my desk, so I will enjoy looking at it every day.

You can find our bronze sculpture photo frame 'Myself' by Pietrina Checcacci in decor accessories categories such as Modern Photo Frames and Bronze Photo Frames. Enjoy exploring these sections for other Novica treasures.

"When I look over what I have created so far I see a coherence with my truth."

"I was lucky to know what would be my vocation at a very young age, and to focus on making it a reality through studying a lot as well as to having the freedom, coherence, honesty and dedication to follow through. I've been doing this for over 50 years," confides Pietrina, who was born in Italy and moved to Brazil when she was only 13 years old.

"I started out painting and life placed at my disposition other artistic manifestations such as sculpting with bronze and fiberglass, lithography and serigraphy, design and applied arts.

"Speaking from a philosophical and aesthetic point of view, my main theme is the relationship between human beings and their earth, their parameters and interactions. This has a base in being original, correct and precisely executed.

"When I look over what I have created so far I see a coherence with my truth. In times when everything is mass produced, copied and re-copied, it is wonderful to have an original and unique means of expression that makes so that everything I create is identified under my authorship.

Throughout her career Pietrina has received several awards and accolades, including 2nd place at Salão Cândido Portinari in Rio de Janeiro's Musel Belas Artes; a Gold Medal from Universidade do Brasil and 1st place at the I Mostra de Artes Visuais do Rio Grande do Sul.