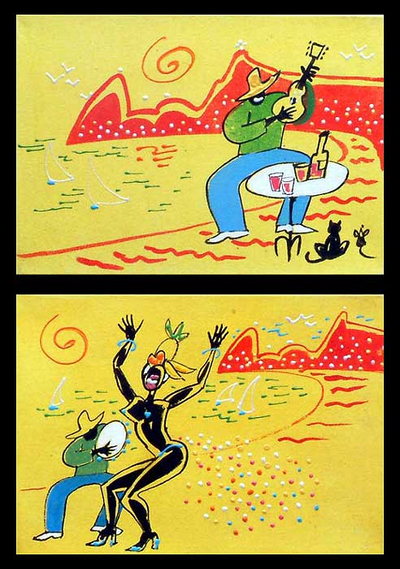 Whether accompanying a samba performance or playing solo, this musician of... more

Whether accompanying a samba performance or playing solo, this musician of traditional tunes inspires the fourth installment of the "Samba of My Land" series by Pame Rio. This version is executed in bright yellow. The guitarist exudes bohemian charisma as he plays amid Rio de Janeiro's most characteristic landmarks, Sugar Loaf Hill and Ipanema beach.

"I made my dream come true – everything I fought for, and was judged for, began bringing me happiness."

"I've always enjoyed painting small images. When I was younger, I liked to draw comic book pictures. My family never encouraged this but when I was 12 years old, my art teacher in school really liked my paintings and asked my mother to let me attend the Fine Arts school. My parents thought it was all nonsense, but they gave their permission anyway.

"I studied there for three years, but had to leave for work, to help with household expenses. When I was 18 years old, however, I decided to drop everything and return to what really is my inner driving force, and I studied art. I made my dream come true – everything I fought for, and was judged for, began bringing me happiness.

"I studied painting, sculpture, and all types of printing techniques. My first job was illustrating pamphlets, then I worked for a newspaper - and suddenly I was immersed in the area of social communication. I worked with different media, different forms, and different approaches. I worked in newspapers and magazines, publicity companies, and cinema. I experimented with abstract art, figurative art, and more.

"I've always been moved by the artistic vein within me. My greatest achievement is to see my work exhibited independently in an art gallery."

Thank you very much for your wonderful red painting ""Favela, Samba and Capoeira Day with a yellow Hat"". It is a great birthday gift !! Just a little disappointed to receive the painting rolled and not stretched for a gift !!

""Ipanema at Night"" is wonderful! It's a glorious splash of life and color and helps to warm our frigid Iowa winter days. We lived in Brazil for a few years, and this painting will be a delightful reminder of our special visits to Rio. Estamos muito felizes com nossa pintura especial. Muito obrigada. Abraços, Lori e Sam