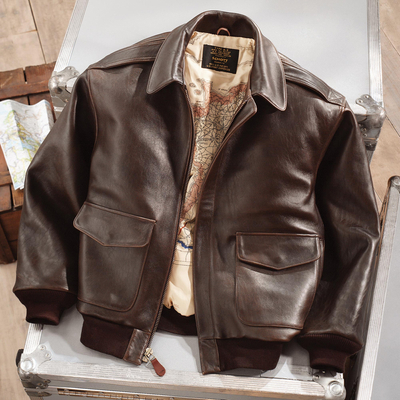 This item is available for backorder and will ship within 2 to 3 weeks. Read more

This item is available for pre-order and will ship within 2 to 3 weeks. Read more

During World War II, maps were often sewn in to the lining of the A-2 flight jackets in case the pilots were shot down over enemy territory. This is a reproduction of the historical WWII flight jackets, originally issued in 1931 and then worn by the allied pilots who flew perilous missions over wartime terrain, and the lining features a re-creation of the survival maps of southern France. A surface of vintage French lamb leather adds to the authenticity. Features include some of the customizations that pilots preferred, such as the wind flap, front zipper with storm flap, hidden snap-down collar points, knit cuffs and waistband, and flap-top and side-entry pockets.

This jacket is exactly the one I always wanted. Fit and finish are perfect.

"Best jacket Ive ever had"

I just bought my 4th copy of this jacket over the past 30 years. It is the best and warmest winter jacket Ive had. My only complaint has been that the lining will start shredding over time. But even with that, I had my last one for at least 7 years before buying this one.

The pajama has bright colors and looks really authentic. The material is soft brushed cotton that does not shrink. A really nice warm Christmas addition for my husband. He loves it.

"A Gift with a Special Meaning"

I bought this beautiful money clip for my brother as a special reminder of his trip to visit me in Ireland. The workmanship is beautiful.

Nice cotton fabric and pattern. I bought this shirt for my son and he really liked it as it is comfortable to wear. Thank you.

Warmest sweater Ive ever worn. Wear it under a weatehrproof wind layer and you will be ready for any outdoor activity in the fall or winter. It is both practical and good looking.

You can find our men's leather A-2 flight jacket 'Road to Victory' by NOVICA & National Geographic Travel Collection in clothing categories such as Travel Friendly Jackets and Leather Jackets. Enjoy exploring these sections for other Novica treasures.