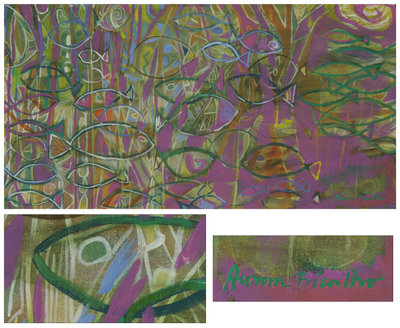 Deep, rich shades of fuchsia, lime and green conjure fish that flourish amid the mangroves. Aurora Bicalho creates a colorful world inspired by the dense marshland of Mato Grosso. She works in oils and acrylics, meticulously applying each color by hand to create this beautiful painting.

You can find our 'marshland II' (2013) by Aurora Bicalho in paintings categories such as Animal Themed Paintings, Landscape Paintings, Expressionist Paintings and Mixed Media Paintings. Enjoy exploring these sections for other Novica treasures.

"I began painting while I was still very young. My first works were textile painting, and murals for children's rooms."

"I was born in Minas Gerais where I began painting while I was still very young. My first works were textile paintings and murals for children's rooms.

"By the beginning of the 1980s, I had formed a family. I began working in the fine arts, particularly painting and woodcut prints. At that time, I graduated in visual arts so as to increase my technical skills.

"During the years that followed, I produced a great deal of work and matured as an artist. I participated in art collectives where I received several awards, including first place in the Salão de Centenário de Teresópolis. I was honored to be chosen for one of the ten top works in the First Biannual Women's Art Exhibit in Stockholm, Sweden."

Since 1995, Aurora Bicalho has lived and worked in the state of Rio de Janeiro. She almost always uses strong and mystic colors to elicit inspiring beauty from nature and people as she works in her own intuitive style. She has shown her work in several Brazilian venues as well as in the Brazilian Embassy in Rome and in the Hanne Brehm Gallery in Zurich.