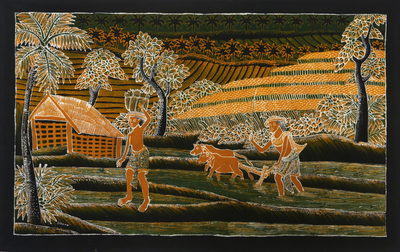 Featuring hand-painted batik on cotton, this wall hanging from Bali celebrates the quiet life on a farm. A rural farmer works with cattle to plow the rice fields while another carries goods atop his head, realized in a meticulous style that utilizes a hand-painted wax resist with colorful dyes.

"A Delightful Batik Work of Art"

This batik wall hanging is a joy to behold. The detail and quality are exceptional.

Just another great addition to my Indo collection. I really like this artist. Please keep in mind that his artwork comes as a rolled canvas that you will have to have stretched over a frame (if you want it framed) and this will add cost to the piece. ($75 - $ 100)

At the end of his training, he thought that Bali should have a batik style of its own, a style that any batik lover would be able to recognize easily from the patterns on the batik cloth.

I Gusti Made Sujana is the son of an Undagi (an expert in the building of traditional Balinese houses). During his childhood his father taught him to carve Balinese houses, which he continued to do for some years. After completing junior high school, he continued studying at an art high school in Denpasar. Soon after graduation, the government appointed Sujana as a junior high school teacher in the regency of Bangli.

In 1974, parallel to his career as a teacher, he began to paint about Balinese everyday life: farmers' activities in the rice field, temple ceremonies, traditional markets, and dances. In 1982 Sujana decided to change his painting medium from canvas to batik and he had the opportunity to learn this technique directly from Amri Yahya, a well-known batik painter in Central Java. For three months, Sujana was deeply engrossed in studying the process of batik in the yogya style. At the end of his training, he thought that Bali should have a batik style of its own, a style that any batik lover would be able to recognize easily from the patterns on the batik cloth. He though that applying the Ubud style of painting to batik would realize this ambition.

After some experimentation Sujana finally developed a style of his own which he calls sigar mangsi, and he now teaches it to his students. Though satisfied with the results of his experiments, Sujana keeps researching new ideas for batik. His paintings can now be found all over the world. Given his admirable expertise and characteristic style, the Agung Rai Museum of Art as well as a couple of agencies from Ubud and Denpasar keep inviting him to give introductory batik courses. He teaches tourists and visiting students from overseas such as Taiwan, Japan, America and Australia. Sujana’s paintings have been in exhibitions in Bali and Java.
View all