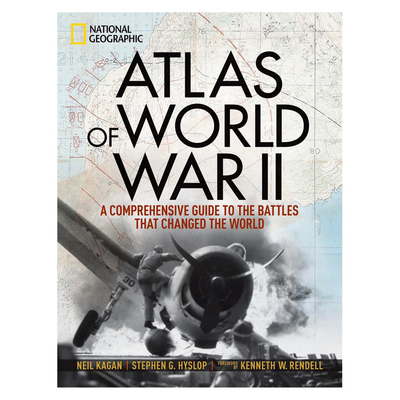 This item is available for backorder and will ship within 3 to 6 weeks. Read more

This item is available for pre-order and will ship within 3 to 6 weeks. Read more

This definitive, lavishly illustrated book from National Geographic features an astonishing array of vintage and newly created maps, rare photographs, covert documents, and eyewitness accounts that illuminate the world's greatest conflict. This magnificent atlas delves into the cartographic history of WWII: naval, land, and aerial attacks from the invasion of Poland to Pearl Harbor and the Battle of the Bulge. Rare maps include a detailed Germany & Approaches map used by Allied forces in the final stages of the war, full large-scale wartime maps of the world used by President Roosevelt, and crucial Pacific theater maps used by B-17 pilots. Satellite data renders terrain as never before seen, highlighting countries and continents in stunning detail to include the towns, cities, provinces and transportation roads for a pinpoint-accurate depiction of army movements and alliances. Gripping wartime stories from these hallowed fields of battle, along with photographs, sketches, confidential documents, and artifacts color the rest of this timeless and informative book.

"What a fantastic book!"

My husband and I are history buffs and this is a present for him. I did take a look and was totally impressed. Thank you so much.

Beautiful! Intricate and fantastic photos. Print is small. The details more than make up this issue.

I am not a history buff but did go through the book and looks extremely interesting and well done. A great deal of work went into this book. Bought it for a Christmas gift.

I ordered this for my brother, an enthusiastic follower of World War II information. This book is an ideal Christmas gift, including many beautiful photos, interesting maps and other information.

Well made item, I cannot wait to hang it. All items from Novica are well worth the price paid. All are beautifully crafted.

Ive been to the Middle East, Lebanon, Jordan several times, but I didnt buy this game called Tawleh then. Now I managed to get it from the US. Beautiful, meticulous workmanship, artistic work! Thanks to the Lebanese masters and NOVICA. Sincerely, Iskander from Hungary.

This lovely item truly does become an instant heirloom to be cherished for years! The craftsmanship is perfect but I have to say the favorite thing about this gift was the dancing colored lights when the sun hits the rainbow glass! Stunning!

"Prettiest Windchimes I own"

The clear bright colors in these glass windchimes are so eye-catching. They make me smile each time I see them.

"A comprehensive view of where our world has been"

Gave this book to my husband as a birthday gift and he loved it. It really had interesting topics in a reader-friendly format!

This was a gift for my niece who lives in New Mexico. It was the perfect item for her to display and use.

You can find our 'atlas of World War ll' by National Geographic Classic Collection in decor accessories categories such as Global Books and Music. Enjoy exploring these sections for other Novica treasures.