Even as Team West Africa works hard to develop new products to delight our customers, we’ve also prioritized our sense of social responsibility by supporting local artisans and our community.

The last few years have brought joy and pain, and we have been there every step of the way to support the families and artisans we love.

One of our esteemed jewelry artisans, Collins Amanatey, has long suffered from kidney problems. To help with the high cost of dialysis, we decided to cover his treatment. After a long, courageous battle, Collins finally succumbed to his illness. In his honor, we set up an educational fund to provide scholarships to two of his children to complete their junior high school education.

Because childhood education is so important to us, we also chose to carry out a Happiness Project with the Dzorwulu school in Ghana, which supports children on the autism spectrum. In particular, we loved this school because of its emphasis on arts and crafts as an essential aspect of the curriculum. We brought in some of our favorite artisans—NOVICA jewelry designers Rita Addo Zakour, Tina Quaye, Robert Taylor, Robert Lanyoh, Ila Suleyman, and Anna Yawson—to help lead classes on designing and stringing beads. We provided materials and seed money to assist in creating a revolving fund to produce products for NOVICA, and we’re excited to see where this leads.

The Birth of a Soccer Field

Way back in 2014, one of our artisans, mask carver Wilson Aboagye, told us about a group of school children in desperate need of new uniforms. In true NOVICA style, we challenged the members of the school to a soccer game against our staff. They won by two goals, and afterward, we celebrated with a huge lunch and the gift of new uniforms.

The videos and photographs which exposed the bad condition of the field and showed where one of the players – Thomas – juggled the soccer ball to 100, touched the heart of Roberto Milk, our CEO, who is noted for his interest in soccer. It was therefore not a surprise to me when he proposed that NOVICA should help to construct the field for the school. This was followed by the good news that his friend Mr. Paul Hower responded positively to help fund the construction of the soccer field for the school.

Paul and Roberto began thinking of ways to sponsor the renovation of the soccer field. Ultimately, Paul challenged Roberto to hike atop a 14,000 foot Colorado mountain and juggle a soccer ball 100 times, together with a group of local teenage club soccer players. Inspired by Thomas and the field build, they all did it, calling the effort #100Anywhere. It was quite an effort juggling at that altitude and thanks to the teenage soccer players they accomplished this feat with their very last soccer ball atop a rocky area of the summit. From this, they garnered fundraising support from the local Gunnison, Colorado community to help fund the construction of the soccer field for the school.

As soon as the idea to construct the soccer field for the school was concretized in 2019, the authorities of the school and the chief together with the elders of the Dumpong village were informed of the intention of NOVICA to repair the soccer field for the school. Receiving the news with excitement, they pleaded that, instead of repairing the original field we played on, they wanted us to help build a new field for them at a new site where they would soon move the school to. After some consideration, their proposal was heeded to. We contacted the District Chief Executive of the area, who agreed and offered their excavator to cut out and level the place for construction to begin. 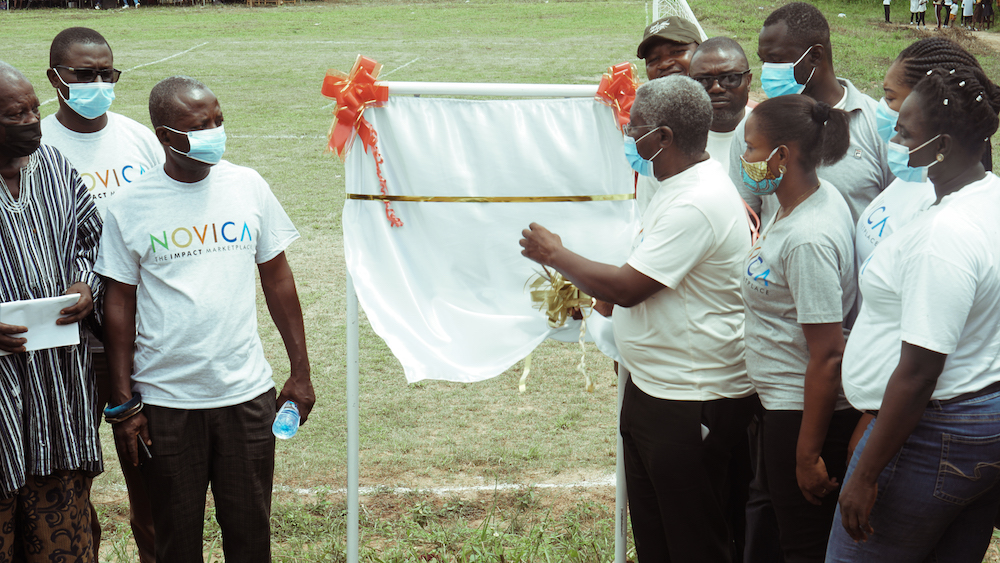 We invited the school, the District Education office of the area, the District Chief Executive of the district, the Chief and elders of Dumpong Village, the Head Teacher, staff and pupils, for a special handing over ceremony of the soccer field. 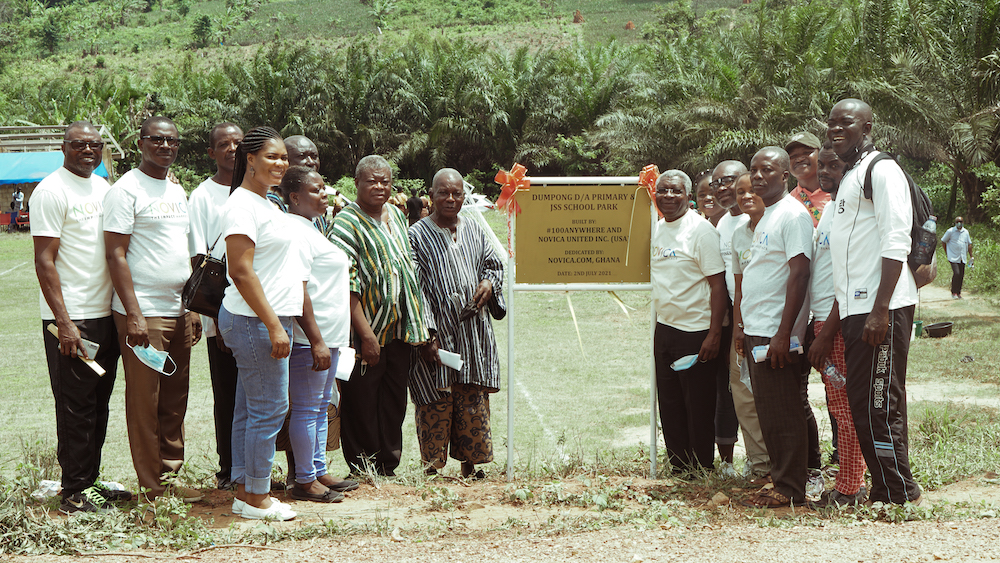 The Chief of Dumpong, Nana Ankobea Baah, the Chairman of the Parent Teacher Association of the school, Nana Safohene, the Headmistress, Mrs. Mercy Asare and staff, Mr. Lawrence Asigbe, the Deputy Director in charge of Supervision from the District Education Office, the pupils of the school, Team NOVICA and some few artisans, helped us to unveil the signpost with the inscription: “Dumpong D/A Primary & JSS School Park, Built by #100Anywhere and NOVICA” to officially commission and handover the newly constructed soccer field to the school and the community. 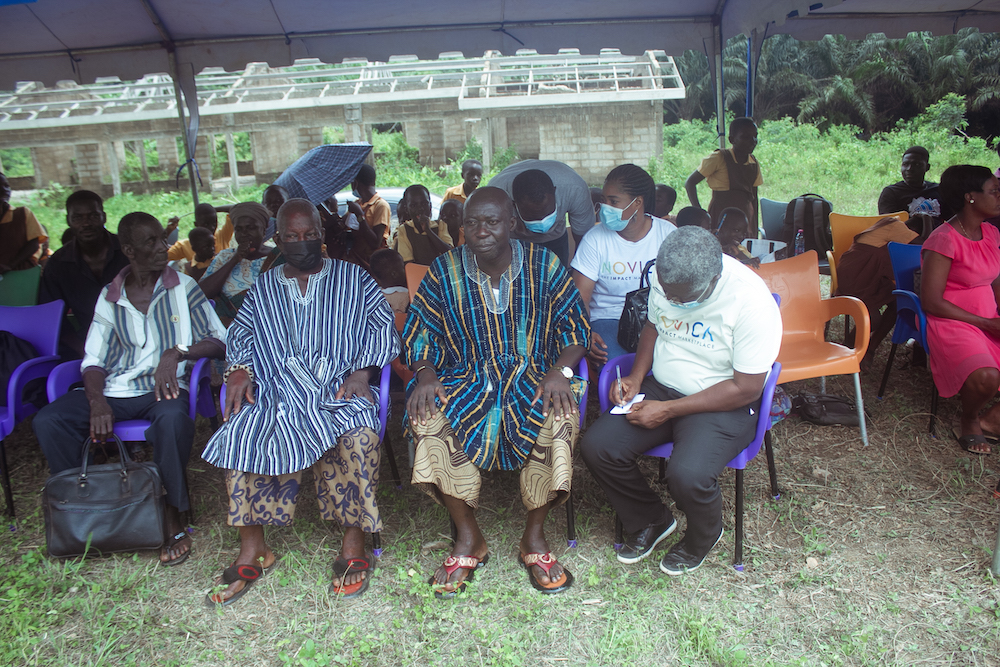 Immediately after that, a football match between the school and team NOVICA was played to initiate the use of the soccer field, which ended in penalty kicks.

An acceptance speech was delivered by the Headmistress, Mrs. Asare, expressing her appreciation for what we had done for the school and she made a passionate request for a mower to enable the school to maintain the field.

The Chief of Dumpong, Nana Ankobea Baah, and the Parent Teacher Association’s Chairman, Nana Asafohene Apeadu, also expressed their gratitude for providing the school and the community with such an asset and made a commitment that the maintenance of the soccer field would not be taken for granted. 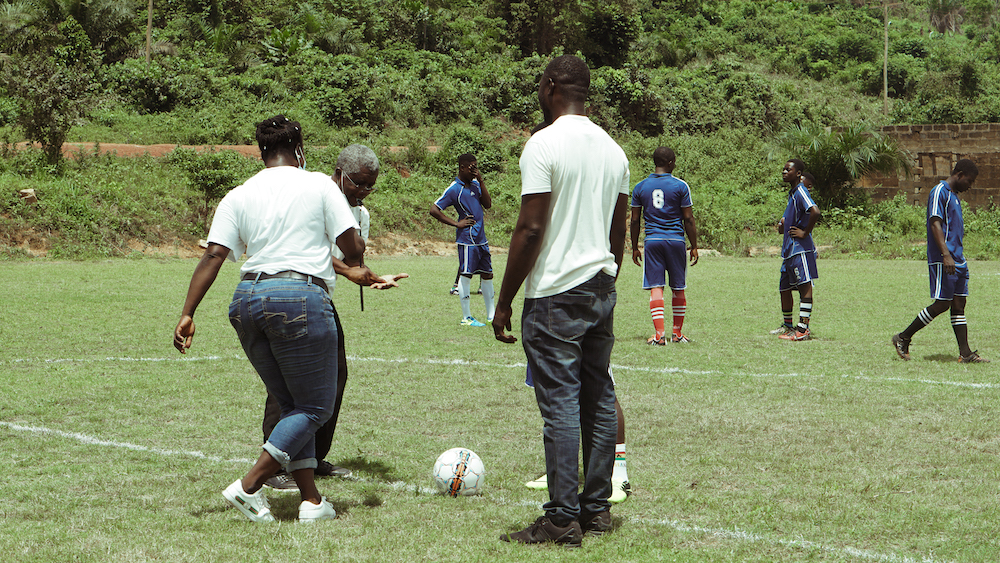 Mr. Lawrence Asigbey, from the District Education Office also expressed his gratitude for the construction of the soccer field for the school. He advised on how the maintenance of the field would reflect the image of the school. He also said that, if the field is kept properly, the district office would assist to do the track markings on the field so that athletics and soccer competitions among the schools within the district can be organized at Dumpong. 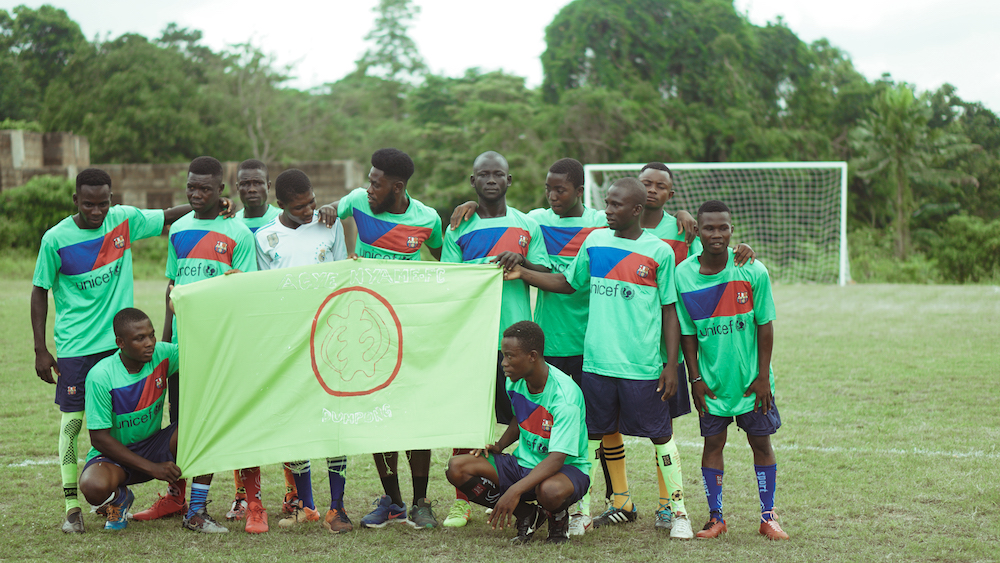 At this point, Team NOVICA would like to recognize and thank Mr. Paul Hower, the Gunnison Colorado community, the teenage soccer players and #100Anywhere for this gesture of constructing a soccer field for the school and the community. It is our belief that this newly constructed soccer field, which will definitely be used for other sporting activities of the school, will go a long way to develop and bring out the talents in some of the pupils like we saw in little Thomas. Thank you all! 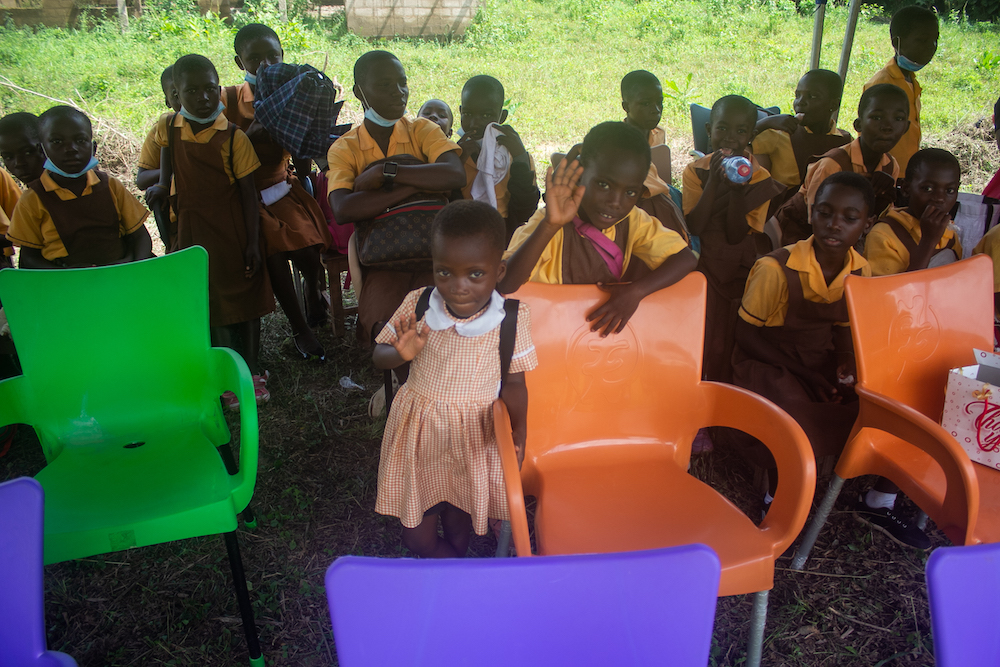