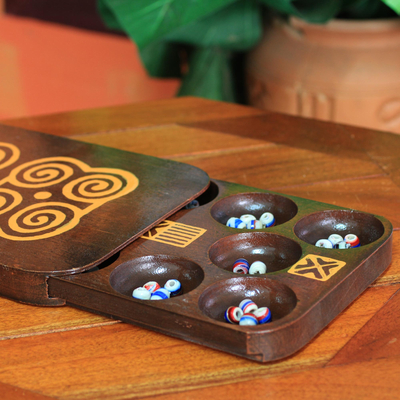 Kofi Tall Agudoawu presents this striking oware set, skillfully hewn from sese wood and finished in mansion polish. The name, Odwaen Mbenn, refers to the abstract sheep horn designs gracing the surface. Expertly crafted, the game is sure to occupy leisure time with endless challenges. The beads are made of ceramic.

"Bought for my little brother"

I've enjoyed this game over the years and I love this presentation.

Kofi Tall Agudoawu has received 2 microcredit loans with 0% interest from Kiva and Novica, the first for $200 and the most recent for $200. Proceeds were used to purchase wood, marbles, and finishing materials for his game sets.

"Today I am developing new strategies to bring the world's oldest game to contemporary society."

Kofi Agudoawu, also known as Kofi "Tall" for his impressive height, is a master craftsman. His creative energies are currently being lavished on a fresh line of the world famous Oware game, both in production, research and records on the history of the game. His full story follows.

"I am Kofi 'Tall,' born Kofi C. Agudoawu in the year 1959 in Ghana. After my secondary school education in 1979, I did a string of jobs. I was a school teacher, accounts clerk, store keeper, and hand pump installer on a national water project. In my spare time, I used to do voluntary work in small villages across the country. One day in 1987, after I had run out of jobs and ideas, I walked into a friend's art studio at the National Cultural Center and told him, 'show me anything I can do around here, and I will do it,' not realizing that it was the beginning of a career. Having a keen interest in art, I quickly learned some practical skills, like screen-making for printing images on t-shirts.

"Then we received an order to carve oware games. In four weeks I had developed and mastered my own style in making interesting designs on practical boards. As my interest in the game deepened I engaged myself in research work. I came out with 'the rules for playing oware' booklet, which I am glad to say, is a practical manual officially recognized by the Oware Society in London and Ghana.

"My work has been featured in several trade fairs and exhibitions with the Ashanti Craftsmen Association. Today I am developing new strategies to bring the world's oldest game to contemporary society."

Oware is a game of skill and strategy designed for two players, challenging mental agility and alertness. It can be played by children as young as four years old, yet the game remains highly competitive among adults. The objective can be briefly described as "counting and capturing beads" and there are no chance factors in it. The player's strategy entirely depends upon the ability for reasoning and counting.

Oware is one of the oldest games in the world. The earliest records describing the game were found in Arab religious texts dating to the Middle Ages, suggesting the game originated in the Middle East and spread from there to Africa, then to Asia with Arab traders, and to the Caribbean around 1640 via the African slave trade. Other experts place its origins in Central Africa; the Masai state that oware was invented by Sindillo, the son of the first man, Maitoumbe, and was originally called geshe.

In Arab countries, the most common name for this game is mancala (Arabic word meaning "to move"). In some West African countries the depressions in the board are referred to as warri or wwari, which means "houses," thus the name owari. In Nigeria it is known as adi, which is also the name of the seeds used to play it; and in South Africa it is called ohoro. With different and exotic names such as congklak, dakon, aggalacang and nogarata it has also been played in Asia long before the Portuguese rounded the southern tip of Africa.

Today, mancala represents the diversity of Africa, as some version of it is played in nearly every African country. Legend relates that Shyaam aMbul aNgoong, founder of the Kuba kingdom of Central Africa, taught the game to his people to encourage foresight and calculation.

Having transcended the passing of the centuries, Mancala has been enjoyed as a family game, a ceremonial right of passage, or as a form of recreation amongst friends. It would be hard to find a greater challenge of ethnomathematics, or a more attractive introduction to arithmetic.