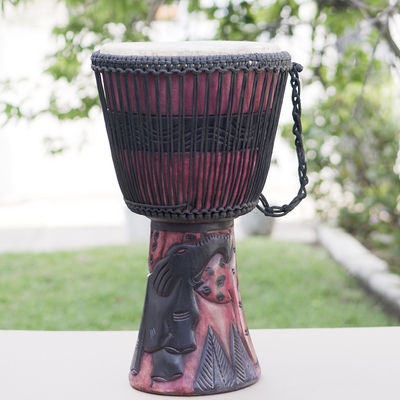 byRobert K. Ghartey
Evoking the majestic African savannah, an elephant trumpets with pride on the... more

Evoking the majestic African savannah, an elephant trumpets with pride on the outskirts of a Ghanaian village. Robert K. Ghartey crafts a handsome djembe drum from seasoned tweneboa wood. The goatskin head is affixed by iron rings wrapped in cotton, and a macramé cord can be slung over the shoulder.

You can find our wood djembe drum 'Elephant Village' by Robert K. Ghartey in musical instruments categories such as Animal Themed Drums, Djembe Drums and Wood Drums. Enjoy exploring these sections for other Novica treasures.

"Life was so difficult then, but I kept my focus and my mother was a source of motivation, always encouraging me to keep up the good work I was doing."

"My name is Robert Kofi Ghartey, born on January 15, 1982 in Ghana's coastal area. I come from a loving family comprising my mum and dad, an elder sister and brother, and four younger siblings. Unfortunately my dad passed away after struggling with some strange illness for about ten years. He left us in dire economic conditions because all properties were sold trying to bring him back to life. A year later, my elder sister also died from a similar ailment.

"I had a desire to continue formal education, but as a result of my father dying I had to drop out of school. I joined my elder brother who was carving drums because I felt I needed to do something with my life now that I was out of school. My brother was glad to teach me and I learned very fast. I could be of help to him at his workshop, including going to get the raw materials. My interest in carving developed. Soon I was crafting beautiful drums and I continued to improve my style and technique.

"The positive comments that I received from customers inspired me to work more. I was keeping the profit I made on each drum and I used part of it to put my younger siblings back into school, since they also had to drop out when father died. This was a major step I had taken and I knew I had to work extra hard in order to keep my siblings in school. My mother would be able to take care of their feeding and personal up-keeping. However, the rate of sales was slow and so, at one point, my brother left carving and moved into another trade.

"Carving was all I had, and so I had to make it work and my younger siblings were also looking up to me. I used to send some of the drums to the art centre to display in a friend's shop. Life was so difficult then, but I kept my focus and my mother was a source of motivation, always encouraging me to keep up the good work I was doing. My siblings were performing well at school, so I knew my effort was not in vain.

"To describe my process, the djembe shell is carved from a tweneboa wood trunk, then we take the dimension of the shell to weld the three metal rings that we use to fix the goat hide. We cover the metal rings with a cloth to avoid rusting. Then we weave the pegs on one metal ring and lace it with the rope. After, we sandpaper the carved shell to give it a smooth surface, and then we design the desired scene to carve on the shell. We leave it out in the sun to dry, then we polish it and put it back outside for about 20 minutes. Meanwhile, the hide will be soaked in clean water for about 40 mins to an hour, to allow for flexibility to stretch on one metal ring and place it on the shell and support it with the other ring featuring the pegs. After that we pull it half way to support the skin and dress it, apply shea butter underneath to avoid cracking and leave it out in the sun for a minimum of four days, depending on the weather.

"We bring it back in and test the sound, re-stretching the drum head if needed and make it sure it sounds beautifully. We dress it and apply shea butter under it to prevent it from cracking, and then it is ready to be played.

"I've been doing this for about nine years, I have taught about fifteen people and currently we have four helpers. My prize or awards are the good comments that my customers shower on my products.

"I would like to tell all Novica customers to keep sponsoring Novica products because they are the best, and Novica also makes it easier for us, the under privileged, to make ends meet.

"I have struggled a lot and therefore my general dreams are to become a great exporter so I could have money. I'd like to set up a foundation to care for the deprived aged and the orphans. I also want to be a very responsible father. By attaining these goals I will say that God has really done everything on earth for me. I know it will surely come to pass, because the sky is just the beginning and Heaven is my limit."
View all