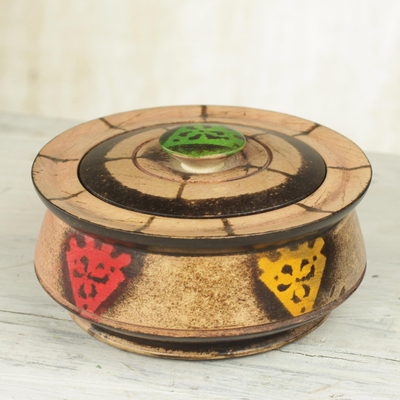 byPaul Quaye
Meticulously carved and painted by hand, this charming bowl and lid derive from... more

Meticulously carved and painted by hand, this charming bowl and lid derive from Ghana's Ashanti people. "This is an ancient item used by Ashanti chiefs and queen mothers to keep their rich ornaments. For a long time, these were no longer carved but we don't want them to lose their significance in our culture," Mac Quaye and Raymond Otchere explain.

You can find our wood decorative box 'Ashanti Queen' by Paul Quaye in decor accessories categories such as Cultural Decorative Boxes and Wood Decorative Boxes. Enjoy exploring these sections for other Novica treasures.

Paul Quaye has received 2 microcredit loans with 0% interest from Kiva and Novica, the first for $150 and the most recent for $100.

Sculpture by the Mac Raymonds Wood Works has been featured on the popular Bernie Mac Television Show.

Paul Quaye is the son of Mac, founder of Mac Raymonds Wood Works. At Novica we were saddened by the news of Mac's sudden demise in May 2011. He was laid to rest in July, as tradition dictates that family members must meet and decide on the date of the funeral, to allow for relatives and friends living faraway to return for a final goodbye. According to African beliefs, since the deceased is embarking on a journey to join their ancestors, the funeral must be befitting of such occasion.

Mac Raymonds Wood Works was a collaborative venture by brothers Mac and Raymond, founded in 1984. Mac had ventured solely into carving right out of school and Raymond, a commercial fruit plantation expert, later pooled his resources with Mac. These two great brains, Mac and Raymond, produce the best works, one as the carver, the other product finisher.

Originally Mac trained under one Dr. Oku Ampofo, a medical practitioner and gifted sculptor. Through his masterful guidance, Mac was able to hone his natural talent for the arts, perfecting his carving skills. Thus the creation of different lines of carvings came with enviable ease.

Raymond eventually left to follow other pursuits, and Mac continued to work at his workshop, achieving such renown that many have applied to be trained as apprentices under his guidance. Those that have graduated, have gone on to become successful carvers of their own right, but always appreciative of Mac's teachings.

Mac had once told us with pride he had taught his youngest son, Paul, to carve and was working with him. Paul has shared with us his commitment to preserve his father's wood carving legacy, and thus what was once Mac Raymonds Wood Works continues now under Paul Quaye's name.