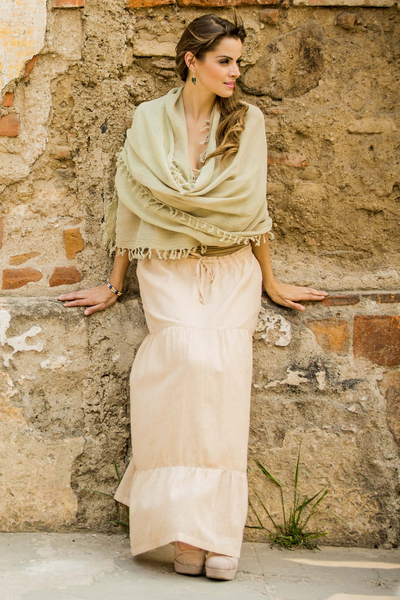 Belarmino Alvarez designs a stylish A-line skirt in three panels with discreet pleats creating a subtle ruffle effect at the bottom. Featuring a drawstring waist, the lined skirt is sewn of raw cotton in a natural hue. The fabric is known in Guatemala as the kashquem weave, a very fine, delicate type of weave that only a few weavers in Cobán are capable of achieving.

Was very pleased with this skirt...even more beautiful than the photo can show, nice sturdy material and wonderful craftsmanship. Thank you!

This dress is very long! If you are shorter, consider a size smaller than normal for the right length!

"Not so well fitting tunic"

This top is beautiful as far as the fabric goes. It has not been sized according to US or other acceptable standards. My XL top fits like a XS or small ....so it is impossible to wear. I would have been delighted to have this top to wear.....but I have to return it as there are no sizes beyond XL.Disappointed !

Buttons are backwards compared to what men in the U.S. are used to. Otherwise, great fabric and beautiful design. Ill be curious how comfortable it is for my upcoming trip to the desert southwest, with 105 degree temperatures.

I was very excited to get this, even though I could only get a Large. It was on sale and Large was the only one to pick from. Well the Large is more like Small. I had to wiggle it down from my hips. It is a bit on the tight side. If you were to buy one, order it 2 times the size you are. I am a Medium (size 8 or 10). The material is very light, but if you have something under like a sweater then it should be fine as just a cover up.

These pants are very nice, good-looking and well made; however, the sizing is very inaccurate to typical women s sizing. They are extremely narrow in the hips as if they are made for girls. I m very disappointed, because the fabric is very attractive.

You can find our cotton skirt 'Naturally Modern' by Belarmino Alvarez in clothing categories such as Eco-Friendly Skirts, Nature Skirts, Bohemian Skirts and Cotton Skirts. Enjoy exploring these sections for other Novica treasures.

Belarmino Alvarez has received 2 microcredit loans with 0% interest from Kiva and Novica, the first for $700 and the most recent for $650.

"We must live in a united world without losing the richness of diversity."

"As a child I developed a fascination for Central American cultures, and so my dream was to visit Latin America. I was born in Spain but grew up in Paris because of my father's work. I moved back to Spain when I was 20 years old to study drama.

"In 1985 I made my dream come true and came to Guatemala, where I fell in love with the country's handicrafts and culture. In 1989 my sisters and I began exporting crafted goods and textile pieces; I was in charge of design and quality control. However, we found that not many people in Spain appreciated traditional apparel, and so I began looking for ways to transform them, and that's how I ended up creating my own designs.

"Little by little I gained access to the textile world of Guatemala, getting to know weavers and artisans, and so becoming a part of each others' life. Eventually I realized that rather than living in Spain, I felt more at home in Guatemala. My love for textiles grabbed me by the hand and took me places I had never before imagined.

"The first thing I designed was a colorful jaspeado (similar to ikat) shirt. I loved it so much that I wore it for several years… until I lost it on a trip. I was heartbroken, not so much for the shirt itself, but for the sentimental value it had for me: that shirt was my very first design.

"I began with traditional Guatemalan textiles, often recycling them, but eventually I saw the need to control every step of the process such as the spinning of the yarn, the dyes, etc., to ensure the procedures were environmentally friendly. I decided to work with organic cotton and natural dyes. I get the cotton from Peru at the moment, because so far it's not been possible to produce organic cotton in Guatemala. The rest of the process is under our care, and this was one of the decisive factors in my decision to stay in Guatemala.

"I'm proud to say I've been in this field since the early 1990's, however working with handicrafts isn't always easy. One particularly difficult time was when I sent a shipment of valuable items to Spain and it disappeared in the loading area of the airport. Someone stole it and the investigation led nowhere. And yet, a month later, the customers received it through regular post without a sender's address! We think the person who originally took it must have gotten scared and ended up paying for it to be sent to the original place. This had me worried sick since I had made a considerable investment to have the order ready, so when I heard from the people in Spain saying they had received it I gave a big sigh of relief!

"I believe arts and crafts must survive, not only because of their hand-crafted nature, their inherent soul, but because they are an expression of a particular worldview by different people. We must live in a united world without losing the richness of diversity.

"I dream of designing and creating beautiful apparel by preserving traditional methods. I hope that everyone involved in this dream – including weavers and customers – is happy either when weaving the garments or wearing them. They are made with love and respect.

"My inspiration comes from the sun and moon; from Guatemala's exuberant flora and landscapes. I love this culture!