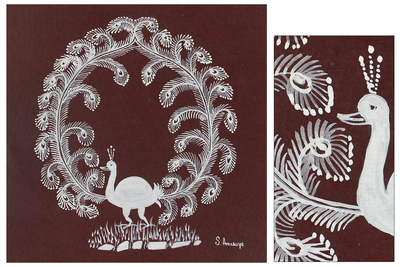 Considered the national bird of India, the peacock symbolizes grace, pride and beauty. Anusuya surrounds the majestic bird with a wreath detailed in white over the maroon background of the handmade paper. Anusuya specializes in the legendary Warli paintings, from the tribe of the same name. This style of painting is believed to date back to 2,500 -- 3,000 BC in the state of Maharastra, and the main themes revolve around village life, harvest, and all forms of celebrations.

You can find our warli painting 'Peacock Wreath' by Anusuya S. in paintings categories such as Animal Themed Paintings, Folk Art Paintings and Other Paintings. Enjoy exploring these sections for other Novica treasures.

"Painting gives me joy and happiness - it is something which always inspires me. My daughter also has a keen interest in this art and already offers me feedback on my art work."

My association with Warli art dates back to when I was barely ten or eleven years old. Warli painting is a traditional art form from Maharastra depicting the lifestyle and beliefs of tribal villagers. I'm Anusuya and I was born and brought up in a beautiful city in Karnataka.

My father was posted in Darwar district in Karnataka and there was a doctor from Maharastra who was also a very great admirer of Warli art. He was an artist himself and used to teach people who were keen to learn this art. I also got really interested in this art and had an opportunity to learn whenever I had free time. My dad was posted there for two years and then transferred to Mysore. I continued my interest and continued painting whenever I had free time. I stopped painting when I was pursuing a degree in science, and returned to painting when I finished school.

In the meantime, I also got married and simultaneously got a job as revenue inspector but, after my children were born, I gave up the job because I wanted to spend more time with them. I continued my interest in art work. Painting gives me joy and happiness — it's something which always inspires me. My daughter also has a keen interest in this art and already offers me feedback on my art work.

I also specialize in Hasechittara painting, which is a traditional art form from Karnataka that I learned at the National Museum of Mankind in Mysore. Several national awardees come to teach varied arts and crafts from different parts of India.

My dream is to promote the traditional art of India. The way I see it, in the advent of high tech gadgets, many children these days are forgetting our traditional art forms. I would like to instill in our new generation the greatness of our tradition and culture. I'm doing my bit by teaching children this beautiful traditional painting. I would also like to exhibit my art work globally. So far, I have been only exhibiting my art domestically but with you, I am glad to be able to exhibit my work worldwide.

Anusuya signs with the initial of her father's name, 'S.' for Sundareshan.