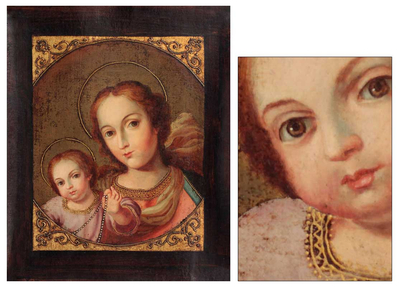 , "Virgin with the Child"

byRivero
Rivero depicts a Madonna in the classic style, capturing her regal posture as... more

Rivero depicts a Madonna in the classic style, capturing her regal posture as well as the serenity that radiates from her quiet features. The young mother holds little Jesus. The child seems solemn and thoughtful for his young age, perhaps presaging the seriousness of his purpose on earth. Rivero adds details with bronze leaf.

You can find our 'virgin with the Child' by Rivero in paintings categories such as Spiritual Paintings, Folk Art Paintings and Oil Paintings. Enjoy exploring these sections for other Novica treasures.

"I was captivated by the dance of the brush on the canvas and the smell of oil paints. With each day that passed, I became more absorbed in painting."

Born on 1 July 1973, Julio Cesar Lira Salazar paints under the name Rivero. "I chose to sign my paintings as Rivero in honor of my grandfather," says the artist. "Though I never met him, I read his personal journals and admire him greatly. He is constantly on my mind."

Rivero's love for painting began at a very young age, yet he always felt there was something more to learn. A friend introduced Rivero to Azorin, a celebrated Peruvian artist (featured in Novica), who welcomed him in his studio. "I consider that day as my initiation into the world of arts because Azorin taught me the art of painting. I was captivated by the dance of the brush on the canvas and the smell of oil paints. With each day that passed, I became more absorbed in painting."

Rivero attended Peru's Catholic University to study sculpture, but had to drop out due to lack of time and financial resources. This did not dissuade him, and Rivero continued on his path towards becoming an artist, self-taught to a large extent.

The greatest challenge he has had to overcome is to control his asthma, because the doctors had advised him against painting. However, his passion for painting was stronger, and now this condition is no longer a problem for him.

When asked to describe his art, Rivero replies, "To me, art is life itself, it's the air that I breathe. The only way that I can express how I feel is by letting my brush run freely through the canvas, experimenting with new techniques. My motto is mens videt, mens audit, cetera surda et coeca, which means 'the mind sees, the mind listens, all else is deaf and blind.'"