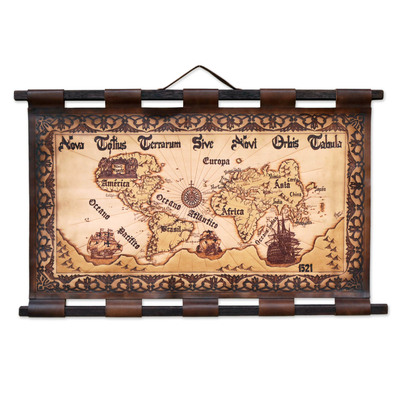 Working on genuine leather with pyrography techniques, Brazilian artisan Glauco creates reproduction maps that look like treasured antiques. This wall hanging depicts the old and new worlds, detailed with geographical features and places and accented with Portuguese caravels and other ships. The map includes cedar wood rods at top and bottom.

Beautiful piece of art, extremely detailed and handcrafted with care. Will definitely purchase for this artist again!

This is so different. It is hard to come up with items to purchase for my son, so when I saw this, I just had to purchase it for him for his birthday..

You can find our leather wall hanging 'Nova Terrarum' by Glauco in wall decor categories such as Globes Wall Hangings and Leather Wall Hangings. Enjoy exploring these sections for other Novica treasures.

"...when I was 15 years old and filled with the rebellion that comes with teenage years, I (...) set off on a challenging voyage..."

"In 1968, when I was 15 years old and filled with the rebellion that comes with teenage years, I grabbed my backpack and set off on a challenging voyage to discover Brazil. Minas Gerais was my first destination, and there I learned leather-crafting techniques. Next, I went to Bahia and became one of the pioneers of the hippie community in Arembepe, Salvador; it still exists to this day. It was there that I learned to work with wood, and thus began my long career in the world of handicrafts.

"I returned home, to São Paulo and began to sell my wares at the Praça da República while also studying design at the Pan American School of Arts. I made leather bags, purses and wallets, all richly decorated. By 1974, my illustrious clientele included Billy Paul and his band, Ray Charles and Diana Ross. My work was once featured in the Washington Post. Eventually the city began some refurbishment work on the Praça da República, which forced many of us artisans to close down. I decided then to move to Rio de Janeiro.

"There, I came into contact with sea life, maps and nautical charts. My passion for maps exploded - as a child I had always been fascinated with them. I began to design maps of the local surroundings on leather and I began an extensive research on the subject. Eventually I was able to reproduce maps for every region and now I have many printed maps and nautical charts from around the world, past and new.

"I make tooled panels that go from maps to paintings of galleons or Brazil's exotic fauna; they are all made by hand to the best possible level of realism and authenticity.

"My work has traveled around the world thanks international craft fairs; I have also received commissions from several embassies and international collectors. I believe that exhibiting my work now through Novica is a good opportunity to reach more people and show them my work. This commitment makes me feel more responsible for the quality and authenticity of my work."