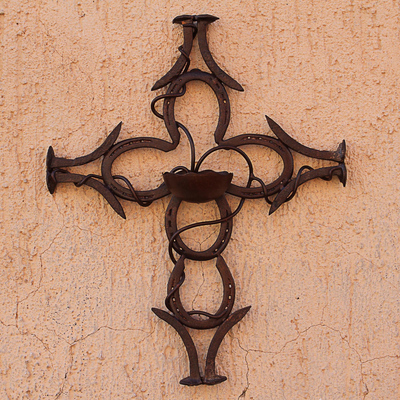 Working with upcycled iron railway spikes and horseshoes, Mexican artisan Alejandro de Esesarte creates this beautiful wall cross. Each section of the cross is formed by a single horseshoe, accented at each end with two curved railway spikes. A steel bowl is displayed at the cross's center, and steel wire curves around and through its open design. Promoting awareness for people with autism, Survival Art by Alejandro presents this faithful addition to your wall decor.

Decor wall art and and sculptures in recycled metal

"Thanks to art, I've gained some recognition and I want to use this to share information about autism, and to help others who are autistic."

"I'm Alejandro de Esesarte. I've been a Novica-featured artisan for many years, but I've only recently become aware that I am autistic.

"When I was born, I was a problematic child and my parents didn't understand what was wrong with me.

"Although I didn't realize I am autistic until I was 59, I always felt like I was different. Once, when I was four years old and in kindergarten, a little girl made fun of me and I reacted violently, hitting and slapping her. I think I realized at that moment that there was something different about me.

"All through my life, I have suffered rejection and felt like I was worthless. For 50 years, I didn't know why I was different, so I lived confused for most of my life. When I began to suspect that my daughter was autistic, I began to inform myself and realized that I am the one with this condition.

"This helped me comprehend much of what I had felt all through my life and to understand how I am. I think all of us want to feel accepted and recognized in some way. We all seek our own identity and, for me, the pieces I craft have become what I am. I find my identity in my art.

"Before Novica found me, I had a hard time keeping stable jobs because of the social deficit associated with autism. At first, I'd carry the pieces of metal for other people until I decided to try the craft myself.

"Because I had a hard time holding down a job due to my lack of communication and social interaction, I had to do something to survive. I started creating decor objects from old horseshoes and railroad track spikes. My art has evolved from this, and it's why I'm presenting this collection as 'Survival Art.'

"I never sought to become famous. Everything I've done, I've done because this was the only way I could get by. I believe it's important to stay humble but I believe that the obsessive behavior that goes along with autism has made me productive as I express myself through art.

"There is still little information on autism. For example, I realized I have a photographic memory. A lot of people don't believe that, but I remember things from the time I was a little boy, such as the assassination of President Kennedy when I was only five. I remember that they closed the border that day and it took my mother and I more than four hours to be able to get across. Things like this help me see autism in a less negative light, because it has given me abilities that have been useful in the creative process.

"Thanks to art, I've gained some recognition and I want to use this to share information about autism, and to help others who are autistic. I don't want them to be rejected. I want to tell them that they, too, can find their own identity, just as I have."