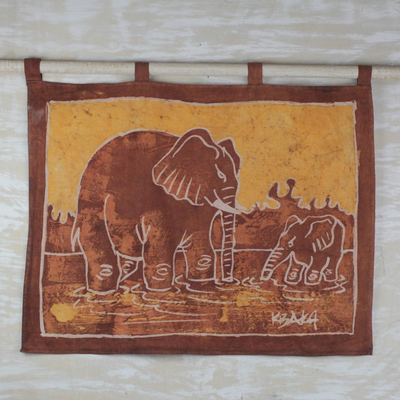 (11)
Despite its power and majesty, a bull elephant reveals a tender side as it... more

Despite its power and majesty, a bull elephant reveals a tender side as it watches over a baby. Both wade together in a shallow lake surrounded by the glow of sunset. K. Baka names this elegant batik wall hanging Woyi Enyo Ee, "Just the Two of Us" in the language of Ghana's Ga people.

am very happy with my wall hanging, the fact I can gaze at them every day and baby will never grow. I love it thank you,

"Perfect for a beach house"

I gave this piece to my daughter who lives in Hawaii. She hung it on a bamboo rod. It looks great and is the perfect casual accent for a tropical themed room.

Absolutely lovely. I was worried it would not be as vibrant looking, and it is gorgeous!

My wife absolutely loved it. Very nice hanging on the wall.

"Pretty but too short"

The picture is deceptive. The scarf is as wide as my hand and goes around my neck to my chest. I cant loop it ...its so short. Very disappointing. Art work is pretty but it would make a better hot pad or placemate.

"Beautiful piece to add to my collection"

The colors are vibrate and it was exactly as the picture online which I greatly appreciated. It was everything I expected and more!

You can find our batik wall hanging 'Elephant Child' by K. Baka in wall decor categories such as Animal Themed Wall Hangings and Cotton Wall Hangings. Enjoy exploring these sections for other Novica treasures.

“I have now been working with Novica for 15 good years. I call it good because indeed the past 15 years have been full of good opportunities.

“Aside from seeing a change in my business, I have also seen a change in the way I do things and my level of creativity. I have made a lot of progress in the way I work, and have achieved a lot of success in terms of making my dreams and visions come true. I used to face challenges like expanding my works and sales, but thanks to Novica, those challenges have been reduced drastically.

“I don't work in the same place since I joined Novica. I use to have a wooden shop but now have moved to a nice rented gallery. I have been able to expand in scale, in terms of both my finances and my client base. Currently, I still train others, and soon they will be joining NOVICA.

“Working with Novica has improved both my life and that of my family. There was a time that I was in the hospital, and just as I was thinking of how to pay the rest of the bills, I had a call from NOVICA that a cheque was ready for me--wow! In fact, I became so excited that I even forgot about being ill for a moment. By the grace of God, that saved the day. I am and will always be grateful to NOVICA.”

"When I was a child, I used to draw a lot. I was so interested in art that in school it was the subject I got the highest marks for. Actually, it was a gift - a talent. I later entered art college for a three year diploma in art. After graduation, I established my studio in the house. While in school, I was painting and selling, so after school I did not need to undergo any brush-up or polishing. I do paintings, craftwork, billboards, screen-printing and signboards. In 1997, I had 20 students whom I taught painting, batik, and textile making. Also, many art students come to me for brushing or polishing. Presently I have two apprentices.

"My paintings are natural, and I try to use inexpensive but high-quality material like calico, denim, military camp tents, and heavy curtain cloths. I find they are stronger than canvas. It also makes it possible to sell my works to a larger audience. I use acrylic paint because it dries faster and it lasts longer. I use phone cards for the painting instead of brushes because it gives me the effect that I want. For my paintings, many a time I see them in dreams and visions before I actually paint them. So in the morning I organize my materials and start painting.