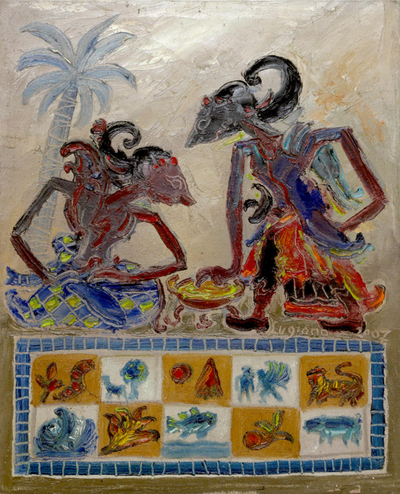 From Lugiono's "Wuku" series, this painting portrays two people as traditional wayang theater characters. Bisma, from a Balinese legend, is the one standing up with his hand on a bowl of water. He is a Prabangkat - a person born during the week of the same name, according to the Wuku calendar. It is believed people born during this week are distinguished as having a soldier-like personality: stern and skillful. They are fearless but shy people.

Developed by Bali Aga people, the Wuku lunar calendar includes 210 days divided into 30 weeks, or Wuku, varying from one to ten days. Each week has a name and number, which can be auspicious or inauspicious, and corresponds to a specific activity. Each week is believed to also describe types of personality according to birth.

You can find 'prangbakat' by Lugiono in paintings categories such as Hinduism Paintings, Folk Art Paintings, Cultural Paintings, Still Life Paintings and Expressionist Paintings. Enjoy exploring these sections for other Novica treasures.