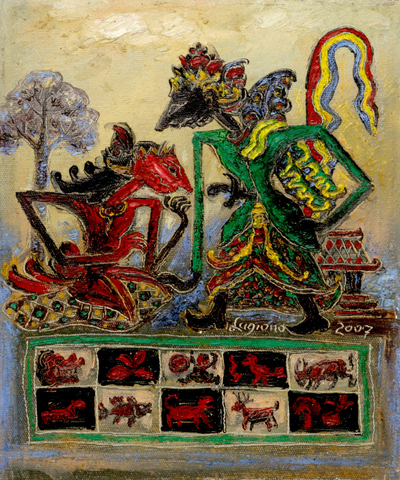 Lugiono adapts characters from the Balinese wayang shadow puppet tradition for his "Wuku" series of paintings. Wuku refers to an ancient Balinese lunar calendar. In this painting Lugiono portrays two characters from a Balinese legend, with Endra standing with a keris dagger on his back. He is a Kuningan - a person born during the week of the same name. According to the Wuku calendar, people born during this week are regarded as "superior" people: they are noble, and may become great figures or hold high ranking positions. They are noted for their fine good looks and tend to be loners, tending to be arrogant though they are hard workers.

Developed by Bali Aga people, the Wuku lunar calendar includes 210 days, divided into 30 weeks, or Wuku, varying from one to ten days. Each week has a name and number, which can be auspicious or inauspicious, and corresponds to a specific activity. Each week is believed to also describe types of personality according to birth.

You can find our 'kuningan' by Lugiono in paintings categories such as Hinduism Paintings, Folk Art Paintings, Cultural Paintings, Expressionist Paintings and Oil Paintings. Enjoy exploring these sections for other Novica treasures.