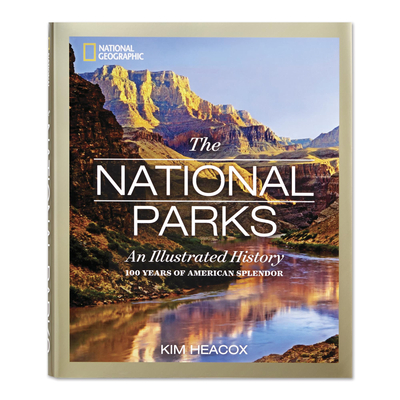 (3593)
Year after year, hundreds of millions of visitors spend more than a billion... more

Year after year, hundreds of millions of visitors spend more than a billion hours enjoying the magnificent, astonishingly diverse realm overseen by America's National Park Service. And the National Geographic Society has been involved with this forward-looking, environmentally-minded department from the very beginning.

This extensive travel planner covers not just the 58 official National Parks but also the nearly 350 additional properties in the Park Service's domain. The premier parks are described in detail, but equal attention is given to the National Monuments, Memorials, Preserves, Historic Sites, Battlefields, Cemeteries, and Seashores, not to mention a network of "National Trails" and even the intriguingly referred to "Affiliated Areas." From Yellowstone to the Statue of Liberty, from the hallowed ground of Gettysburg National Military Park to the Pacific waters shrouding Hawaii's U.S.S. Arizona Memorial, this catalog spans American history and territory both, with practical advice on how to reach each park, when to go, and what to do there.

This GREAT book describes our U.S. national parks, one by one, each one with turn by turn directions, sights to see, accomodations (or lack thereof), trail or rafting ease/difficulty,times to go/avoid, sights to see, AND has contact WEB SITES, phone numbers etc. Wonderfully enjoyable reading, even if you dont go to more than a few, and well worthwhile to own if you DO plan on going to ANY! I have visited some of the described Parks, unfortunately not all, and have found it to be quite accurate, correct, and informative. You will NOT regret this purchase!

This is a beautifully printed book and the information is put together in a very interesting and easy to read manner.

I would use this book to help me plan fun and educational trips. It has really good information.

Gets you excited to get out and enjoy the beautiful treasures of this free land!

"find the majesty of he US"

Good book to read, explore reference. Not too large as a book, nor too small (guidebook) 400 pages and 1 think, 8x10 is right size

This was a perfect housewarming gift! So pretty and unique!

Such a cute game, with clever word questions for all levels

Good quality game; lots of fun for players of most ages.

From Pennsylvania, United States of America

"A lot of compliments"

I ordered this cuff just because I thought it was unique and it also just satisfied my need for the unusual that you just can not buy anywhere. Needless to say I get a lot of compliments on it and wear it everyday.

"Add a touch of whimsy"

This is so cute. I love seahorses.

You can find our 'the National Parks' by National Geographic Collection in decor accessories categories such as Nat Geo Gifts Books and Music. Enjoy exploring these sections for other Novica treasures.