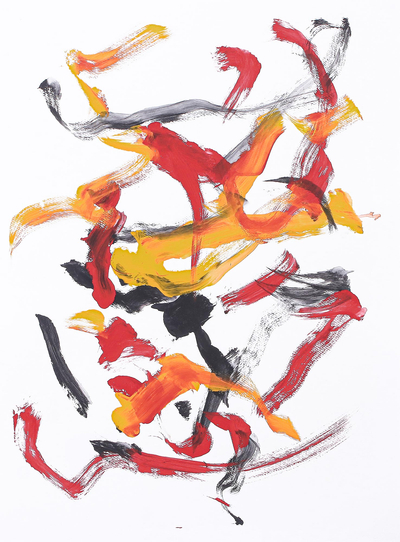 (1)
Brilliant colors leap excitedly across a field of white. Conjuring the... more

Brilliant colors leap excitedly across a field of white. Conjuring the excitement of a summer adventure, Jojo selects a clear palette of yellow, red and black. Deliberate brushwork clusters near the center yet ventures boldly toward the borders of his painting.

The reverse side of this original painting features the Elephant Conservation Center's seal of authenticity, as well as Jojo's biographical information.

Please note: The elephants hold the paintbrush carefully, by the tip of their trunk — which is also the elephants' delicate nose area. Slight smudging, and an occasional water droplet, here and there, are to be expected on most elephant paintings. We like to consider that these imperfections add to the conversation value of each piece.

My husband gave this painting to me as a Christmas gift. I love it and am deeply moved. It will be framed and hung in a place of honor in our home. ?

You can find our elephant painting 'Summer Adventure' by Jojo in paintings categories such as Elephant Art Paintings and Acrylic Paintings. Enjoy exploring these sections for other Novica treasures.

Jojo's paintings have been auctioned at Christie's for thousands of dollars.

Born in 1993, Jojo is a mischievous but basically sweet-tempered adolescent elephant. In the Thai Elephant Orchestra Jojo usually plays a mean harmonica but he can double on one of the xylophones. His painting style is far less structured than that of his peers. Jojo is an active member of the Lampang Elephant Art Academy, based at the Thai Elephant Conservation Center in Northern Thailand. Jojo's paintings have been auctioned at Christie's for thousands of dollars.

In 1998, searching for new ways to raise rescue funds and worldwide public awareness, elephant expert and author Richard Lair, advisor to the royal Thai Elephant Conservation Center (TECC), conceived of a novel plan. He invited to Asia two media savvy, New York-based conceptual artists -- Vitaly Komar and Alexander Melamid -- to help him create a publicity campaign while training rescued Asian elephants to paint. Art Historian Mia Fineman traveled with Komar and Melamid to Asia, helping write "When Elephants Paint," a fascinating book about the venture. (The book notes that wild elephants naturally doodle on the ground with twigs and pebbles -- a proclivity that might explain the ease with which they take to painting.)

Richard Lair provides Novica with the TECC's highest quality elephant paintings, directly overseeing special "Novica Sessions" with the TECC elephants. For these sessions, the elephants paint on French archival paper, using high quality acrylic paints. (This in contrast to the elephant paintings sold in Asia to tourists -- typically composed of low-quality paints on non-archival paper.) Lair completes the process by embossing each painting with an official stamp of authenticity. For Novica, Lair comments that he rejects all but the most intriguing and unblemished paintings, as an additional way to thank Novica's customers for their considerable support, while providing a high quality painting in return.