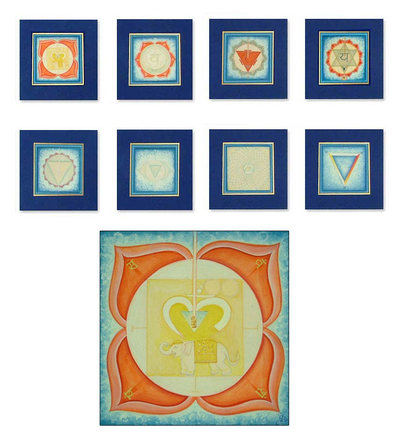 Dr. Sneh Gangal explores the susumna path of kundalini energy as it passes through eight chakras, which she depicts with original stylizations. According to the top line, first on the left is Muladhara, which corresponds to the base of the spine where kundalini lies dormant. It is symbolized by a four-petal lotus featuring its respective mantras. It is followed by Swadhisthan situated above the genitals and thus increases sexual energies and the power to control them. It is represented by six petals holding its distinct mantras for meditation. Next is Manipura chakra above the navel, depicted as a 10 petal lotus with its mantras. This chakra is related to emotions such as shame, fear, inertia, treachery, aversion, ignorance, worldliness, sadness, jealousy and desire, which can be transformed into positive qualities through meditation on this center. The last chakra on this row is Anhata, located at the spinal center of the region of the heart, and symbolized by a twelve-petal lotus featuring the enlightening mantras.

The second line begins on the left with the Visuddha chakra located in the throat, where it is believed the kundalini penetrates the individual's soul to attain purity by seeing the self ( Hansa ) in the heart. The sixteen petals feature their own mantras. This is followed by the Ajna chakra, symbolized by a two-petal lotus believed to reside between the eyebrows and is thus related to all aspects of the mind. The seventh chakra is Sahasrara, symbolized by a thousand-petal lotus and represents the final abode of kundalini. It is believed to be the meeting place of Sakti (female energies) with Shiva (male energies), representing pure consciousness. Its petals are inscribed with all the letters of the Sanskrit alphabet. Sahasrara is as lustrous as a thousand full moons and its filaments are tinged with the color of a thousands rising suns. As soon as kundalini ascends into Sahasrara, one enters a region that is inconceivable to the mind and indescribable in speech, a state of realization of oneness of individual soul and the supreme soul. When a yogi reaches this place he is believed to be endowed with the six divine powers: absolute knowledge, sovereignty, power, strength, valor and formidability. Thes powers are said to be God’s essential nature, and they are described in Uddhava Gita in full detail.

The eight paintings represent Soma, a minor chakra seen only by accomplished yogis. Represented by a twelve-petal lotus, it is centered by the A-Ka-Tha triangle where Sakti is represented by three essential aspects: will, action and knowledge.

Each watercolor painting features a cotton-lined card paper mat board.

You can find tantric paintings 'Eight Chakras' (set of 8) by Dr. Sneh Gangal in paintings categories such as Spiritual Paintings, Folk Art Paintings and Watercolor Paintings. Enjoy exploring these sections for other Novica treasures.

Dr. Gangal recently received the National Award for Traditional Art (2003). This distinction is conferred by the government of India through the Ministry of Textiles.

Dear Dr. Gangal, I have had the pleasure of displaying a number of your wonderful deep paintings at my study. Thank you dear for helping me in my journey to understand Chakti, I am greateful.

I have four of Dr. Gangal's bright, whimsical ""Season"" pictures hanging on my office wall. I call them my ""happy"" pictures because just looking at them makes me smile and lightens a stressful day. I also get many, many compliments from co-workers and guests.

Dear Sneh, Thank-you for the wonderful painting 'Pink Dahlias'. Just as you said, such flowers are symbolic of love & happiness,...- Your painting has an exquisite golden charm about it, that delights my eye, & pleases my heart. Everybody who sees it loves it! Thank you so much.