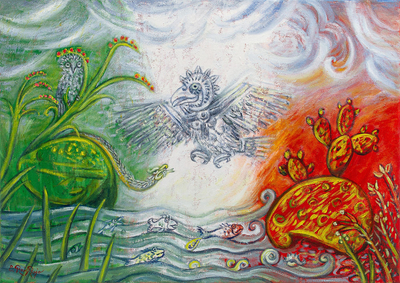 Working in a surreal style, Enrique Ruiz paints a landscape filled with Mexican symbolism. The canvas takes the colors of the flag — green, white and red. As with the flag, an eagle centers the composition but is depicted in the style of Aztec art. The Aztecs, or Mexica as they called themselves, left their island town to seek a new place to establish their home. Legend tells how, when they saw an eagle perched on a cactus with a serpent in is claws, this would be the place they were seeking, and this image appears in the country's national seal. The artist gives this snake the same style as the bird, alluding to Quetzalcoatl, the "feathered serpent." Their island, located in Lake Texcoco, is brimming with fish in this beautiful allegory, and their world is beautiful.

You can find our 'expression of Nature' (2020) by Enrique Ruiz in paintings categories such as Animal Themed Paintings, Cultural Paintings, Landscape Paintings, Surrealist Paintings and Oil Paintings. Enjoy exploring these sections for other Novica treasures.

“Since I was a child, I was aware that painting and sculpting was my life; dedicating myself to art is my passion. I am Enrique Rojo, an artisan, sculptor and painter. I was born in the city of Guadalajara in the state of Jalisco. I studied at the School of Plastic Arts of the University of Guadalajara. I had the opportunity to be an assistant to Maestro Jorge Martínez; and with him I learned to perform some artistic techniques that have taught me to refine my technique more and more every day.

“The material I work with is clay, with the technique called burnishing--characteristic for its shine and softness. What I like most about my work is the opportunity to create pieces full of magic and color. It gives me great satisfaction to contemplate a finished piece and observe what I once imagined. My main inspiration is the voice inside me and from each of my past experiences. They are an engine that gives me the will to continue creating more unique pieces.

“One of the challenges that has marked me the most is the varied difficulties in the creative process and in the materialization of my ideas. Consistent practice until you achieve exactly what you want. This has taught me to develop patience in learning. It is a process that teaches you to know yourself.

“I especially appreciate my clients. When they acquire any of my pieces, I know that there is a part of my imagination that connects in a special way with them. Now I am on a mission to create a space for the exhibition of my pieces. I want to exhibit in museums and artistic spaces in Mexico.”