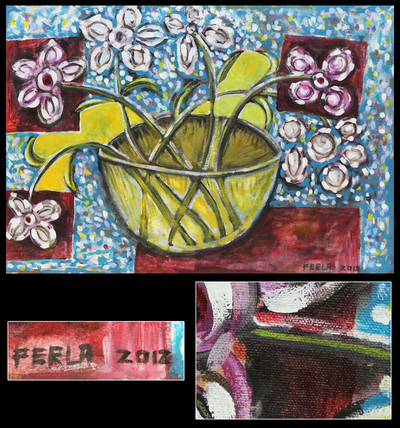 Brazilian artist Perla conjures a cheerful mood with this acrylic on canvas. Featuring a transparent vase with pretty flowers, the composition flows with colorful exuberance.

You can find our 'vase of Happiness' by Perla in paintings categories such as Still Life Paintings, Floral Paintings, Expressionist Paintings and Acrylic Paintings. Enjoy exploring these sections for other Novica treasures.

"I depict objects, people, and facts whose color and form remain fixed in their spiritual state - now melancholic, now filled with ecstasy and the understanding of being."

Perla has been featured in Voyage magazine.

"I was born in Paraguay on the Brazilian border, and in 1963 I took up residence in Brazil. Ever since I was a small child I had a passion for painting and in 1974 I became an artist by profession. I tend to paint that which I feel and experience at the moment. My recurrent themes are women and family, for I am very close to my own family. When I paint a woman, the image is me, my mother, my grandmother, my daughter and all the women to be born in this family.

"Painting is the only activity that fulfills me; when I paint a good piece I feel very good, renewed and re-energized. I think I was born with this need to excel through painting. My work is now part of private collections in Germany, Portugal, Italy, Morocco, the United States, France, South Africa, Japan, Czech Republic, Spain, Venezuela, Argentina, Martinique and Hawaii. My career is a successful one; I have received many awards and medals at the different venues in which I have participated.

"I am an artist with a latent sensibility. I depict objects, people, and facts whose color and form remain fixed in their spiritual state - now melancholic, now filled with ecstasy and the understanding of being."