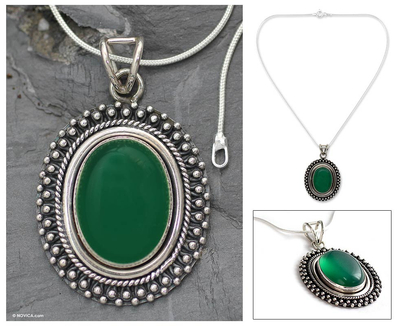 Evoking the Sariska Forest Sanctuary, green onyx radiates a fertile beauty. Bhavesh centers a silver pendant with a sleek oval stone. The pendant is worn on a sterling chain necklace.

From in a river valley

"great pendant but chain is too short"

the chain is also hard to fasten. i used a longer, nicer chain and it works very well. the green is deep and luminous.

"The stone is beautiful!"

These are gorgeous and lightweight. Love them!!

I love this dainty necklace! The only thing that I would change, is the length of necklace. I wish it had more links so that one could wear it at say 22 or 24 inches, instead of just the 20 inches.

Gift for friend..she loves it. Looking for more.!

Gorgeous! Not too big or too small. Perfect!

This bracelet is exactly as pictured. It is bright white high-quality silver, not too heavy, not too large. The hammering makes it look like sparkling ripples of water. It came in a timely fashion and packaged well inside a beautiful decorative bag and sturdy box. No regrets on this purchase!

Bhavesh is a highly-skilled jewelry artisan. In his workshop, he employs several artisans on a full-time basis and others on a part-time basis.

Bhavesh is a dedicated father who works very hard to provide for his two children.

"My father was a craftsman of precious stones… [designing] was not difficult for me, since I knew a great deal about gems and their settings. I think it was in my blood."

"I come from the enthralling city of Jaipur where I was born and brought up. I was raised by a single parent, since I lost my father when I was barely two and half years old. He died in an accident. Since then, my mother worked so hard to bring us up. After my schooling, I received a bachelor's degree in commerce and also did a short term course in the French language.

"Jewelry crafting is our family tradition, dating back to the ancient time when Jaipur was brought to its present structure by Maharaja Sawai Jai Singh II. During that time, my ancestors were jewelers in the kingdom of Jaipur. Since then, the tradition and art have been handed down from generation to generation.

"My father was a craftsman of precious stones. I grew up observing the colors and exquisiteness of jewelry so I was inclined to do something different within the same field. I started selling stones when I was only 16. But it turned out to be not very interesting, so I started designing jewelry. It was not difficult for me, since I knew a great deal about gems and their settings. I think it was in my blood. My designs were appreciated in the market and this motivated me to become a professional. Eventually I opened my own workshop.

"My designs feature gold with precious stones and sterling silver. I use both traditional and modern techniques, according to the requirement of my design. Five artisans assist me. My designs were exhibited in Paris in 2003 and 2004 and received an overwhelming response. I'd welcome your comments too."
View all