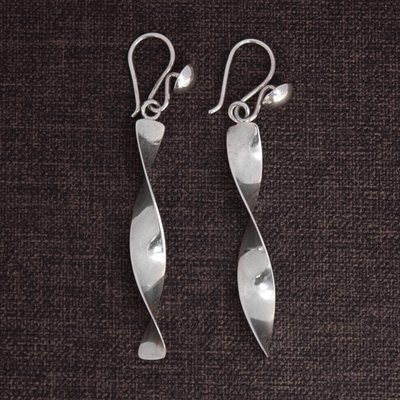 (21)
These appealingly simple earrings, perfect for every day, are formed in the... more

These appealingly simple earrings, perfect for every day, are formed in the shape of a twisted ribbon. Joycelyn Sena Zigah of Ghana designs and crafts the earrings from polished sterling silver.

I have always wanted this after seeing it on the hand of a friend.

much smaller design. meant for a child and or someone with small hands.

Cute but on the small side.

Thank you for this well made gleaming cross. I love it so much that I ordered another one to have for a gift.

"Not what I expected"

Slightly disappointed with the size and detail of the pendant. I expected more weight and craftsmanship.

Back to My Roots, Handmade Sterling Silver Bird Pendant

You can find our sterling silver dangle earrings 'Twisted' (2.4 inch) by Joycelyn Sena Zigah in jewelry categories such as No Stone Earrings, Silver Earrings, Sterling Silver Earrings and Dangle Earrings. Enjoy exploring these sections for other Novica treasures.

"I was born more than five decades ago in the town of Adidome in the Volta region, where my parents lived at that time. In those days, the traditional African religion of worshiping at shrines was predominant. When my mother was due to give birth to me, my grandmother believed that the midwife in the town where she lived had some sort of bad energy that caused all the babies she delivered to die mysteriously soon after birth. With this belief in mind, she refused to let my mother deliver me there.

"So on the day of my birth, they had to travel miles to the hospital in the next town for me to be delivered. It was a very grueling experience for my mother and she has considered me special after that. My name, Sena — which my mother appropriately named me — means 'bringing heaven to earth' in the language of the Ewe people of Ghana.

"The Ewes live mostly in the Volta region of Ghana, east of the Volta River, and we are the second largest tribe of Ghana. I grew up in Hohoe but later left for Koforidua in Eastern Ghana for my secondary school education, and then attended the university in Kumasi.

"After successful completion, I returned to Ghana. I was eager to pass on the knowledge acquired and to help develop the jewelry arts. I chose a public institution where we took in most of the graduates from the metal arts department of the University of Science and Technology. This gave me the opportunity to impart this knowledge and put to use my skills in the industry. I rose to become the head of the jewelry workshop and worked with the company for a total of fifteen years.

"From there, I was ready to start my very own jewelry workshop. I initially began with a staff of two, which has gradually increased to five permanent staff members and five casual workers. I also take in many apprentices and interns from the university, whom I train during vacations.

"The initial challenge faced when I started on my own was pre-financing production of the precious metal designs I produce. Material costs were very unstable and any time you allocated a budget for production, the figures changed at the time of purchase. It was and still is challenging, but is manageable with help from family and friends.

"Another challenge was working in a male-dominated field. Coming from a very traditional setup, it was tough as a woman to be taken seriously in the trade by my colleagues, who are mostly men. I am one tough cookie so I don't get pushed over easily. I persevered and worked harder until I earned the respect due me.

"I am grateful for this opportunity to sell internationally and I pray this draws me one step closer to fulfilling my aspirations. I also hope you will take pleasure in wearing my designs."
View all