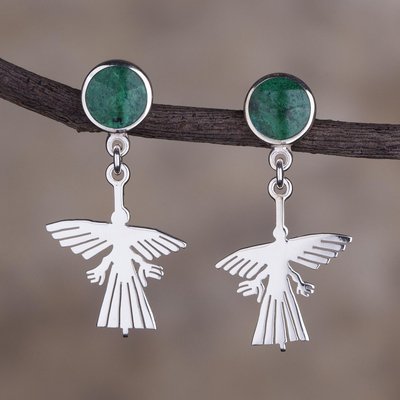 The stones and silver work are absolutely beautiful. They are post earrings, and the posts poke my head a little bit, they are that long. I also find (aging, saggy earlobes) that my lobes bend a little where the stone is, so that they dont hang as nicely as I would wish. So, its more about your specific earlobes, I guess.

"It is a treasured gift"

It?s beautiful, I love to see my sweetheart wearing it!

This ring is beautiful - The sterling silver design and quality are flawless and the chrysocolla is a fascinating and lovely color. Sizing is perfect as well. A true work of art.

I think of the beautiful Andes mountains of Peru each time I wear this. It is a wonderful reminder of an amazing time spent in Peru. Amazing craftsmanship.

Moche Mountains, chrysocolla stone ring has good craftsmanship, well made, solid, comfortable to wear. Its a narrow ring that is noticeable. The color of the stone is a pictured. The stones are a little lighter in color that the other chrysocolla jewelry I have, but I can wear the bracelet with this ring anyway. Looks like quality, good value.

You can find our chrysocolla earrings 'Hummingbirds' by Juan Contreras in jewelry categories such as Animal Themed Earrings, Chrysocolla Earrings, Sterling Silver Earrings and Dangle Earrings. Enjoy exploring these sections for other Novica treasures.

Juan Contreras has received 3 microcredit loans with 0% interest from Kiva and Novica, the first for $700 and the most recent for $700. Proceeds were used to invest in the purchase of sterling silver and natural gemstones for production.

Juan confides his inspiration comes from silver itself. "I am driven by a desire to excel in this art," the artist says.

Born in 1964, Juan Contreras and his wife, Rosario Sulca [a Novica featured artisan], used to run a clothing shop, but financial hardship struck and things were not going well for them. Friends suggested the art of jewelry design, and Juan grappled with the decision for years. It was a world he absolutely knew nothing of, yet offered myriad creative possibilities.

Rosario was eager to design jewelry, and at first they relied on expert silversmiths. Little by little, however, Juan became fascinated with the process and became an eager student – he is now passionate about designing as well as crafting his own jewelry. Juan's style is different than his wife's, who is also a Novica featured artist, and they both couldn't be prouder to see how far they have come after such humble and shy incursions into jewelry making.

It's been 12 years now, and Juan confides his inspiration comes from silver. To him, it's the best decision he could have taken and he is driven by a desire to excel in this art. His aim is to transmit beauty and quality. He faces the constant challenge of keeping up with current trends as well as creating new and original designs. Now his work can be appreciated in important exhibits – another reason for Juan to be proud and have no regrets about the decision it was once so hard to make.