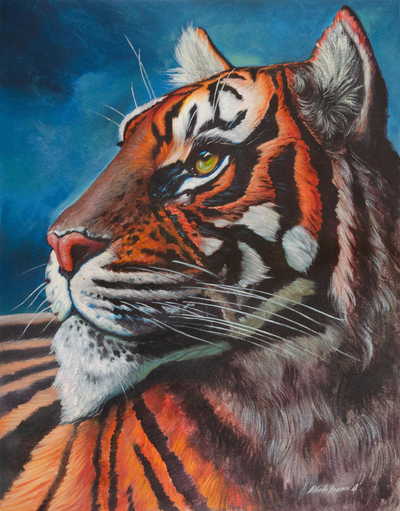 (1)
With soulful eyes, a wild tiger gazes off into the distance in this painting by... more

With soulful eyes, a wild tiger gazes off into the distance in this painting by Peruvian artist Alberto Herrera. He paints this composition in a realist style, capturing every minute detail of the wild feline's face and fur. This painting is sure to add a touch of majesty to your home.

You can find our 'wild Feline' (2018) by Alberto Herrera in paintings categories such as Animal Themed Paintings, Realist Paintings and Oil Paintings. Enjoy exploring these sections for other Novica treasures.

"Painting is a medium that permits one to express emotions, experiences and ideals."

Alberto Herrera was born in 1966 in the Amazon region of Peru. At the age of five he moved to a large city with his family and, immediately after finishing high school, he enrolled in the prestigious National School of Fine Arts. Herrera feels a vocation for the arts that runs in the family.

He specialized in drawing and painting, and after graduation he embarked on his artistic career. His first works were realistic and figurative, but they gradually moved toward the surreal, expressing his personal experiences.

Distinguished by their contrast and expressive force, Herrera's works have been exhibited in the U.S. (New York), Costa Rica, and Spain. In Spain, he was twice awarded the Hispano-American Prize for Young Artists. In addition, he received a prize for Distinction in Drawing from the Lima School of Fine Arts.

"Painting is a medium that permits one to express emotions, experiences and ideals," he says.
View all