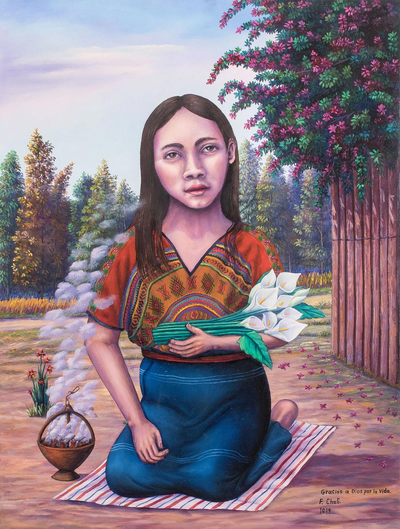 (1)
Working diligently with a keen attention to detail, Filiberto Chali paints this... more

Working diligently with a keen attention to detail, Filiberto Chali paints this composition to celebrate the beauty of a Guatemalan woman. Seated on her knees alongside a fence against a forest landscape, the woman holds a bunch of calla lilies in one arm. She wears a traditional outfit as a censer emits smoke into the air.

This is a stunning and beautiful box. The artwork is breathtaking and the detail of each scene is amazing. A very talented and gifted artist. This box will be cherished by my family for years to come.

Treasures of My Homeland, Scenes of Guatemala Hand Painted on Cedar Decorative Box

You can find our 'thank God for Life' by Filiberto Chali in paintings categories such as People and Portraits Paintings, Floral Paintings, Realist Paintings and Oil Paintings. Enjoy exploring these sections for other Novica treasures.

"I was drawn by the freedom of expression and the ability to express my feelings on canvas, creating scenes in the infinity of colors and tonalities that nature gives us each day."

"I was born on April 3, 1965. My childhood is filled with wonderful memories. When I was in primary school, I'd pull weeds in the cornfields in my spare time. I also fed my mother's cows, and learned to milk them, which I enjoyed. My father was a farmer and cultivated corn and beans.

"I first became interested in art through my father's friend Oscar Peren, a great naïf painter. Working in oils on canvas, he painted traditional regional themes. The way he combined colors and used the brushes amazed me! I realized I wanted to paint, too, that it was my vocation. I began to save up to buy materials, because I didn't have money in those days.

"Painting became my fascination because I was curious about mixing colors and obtaining different tonalities. I was drawn by the freedom of expression and the ability to express my feelings on canvas, creating scenes in the infinity of colors and tonalities that nature gives us each day.

"When I'd saved enough money for materials, I sat down to paint what would be my first work. It was small – only 8 by 10 inches. I planned to paint some hens and chicks, but the final result looked more like crows than the chickens I'd imagined. I kept that painting for five years until it got lost.

"I began my career in 1983 and, through a lot of effort, I've been able to build my home. In the front room I've set up a small gallery where I exhibit my paintings. I also show my art in other galleries and sometimes the Bank of Guatemala requests some of my work. This is a source of pride for me.

"When I look back, I remember some difficult times but with a happy ending. The Bienal de Arte Paiz is not just an important exhibition, but the event that consolidates the Guatemala artistic scene. It has changed people's attitudes toward contemporary art and has become a key element in my country's contemporary culture. In 1984, I had to hurry to finish a painting to enter. I was worried, as I only had a little paint left. But with the last of it, I was able to finish the painting and raced to submit it on time. Weeks later, I was surprised to receive a letter informing me I'd taken first place in the free-style category. It was one of the best moments of my life, and that feeling has accompanied me my whole life.

"When they were young, my children painted. Now, with their schoolwork, they don't have time for it anymore. I wish they'd take the art inside them more seriously and spend their free time painting. I dream that painting will become a Chalí family tradition."

Filiberto Chalí is one of the best known landscape painters in Guatemala. He has exhibited his work in New York's El Desfile Cultural Hispano de New York and in Arte Contemporáneo Guatemalteco in Taipei, Taiwan. In 2001, he participated in the XII Festival de Arte Sacro in Madrid, and has also shown his work in Paris and in Sweden.
View all