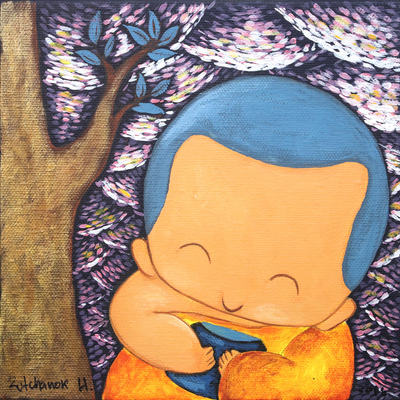 Signed Painting of a Cute Buddhist Monk with a Tree, "Happy Giving II"

byRutchanok Jinapun
Having grown up in the countryside near a Buddhist temple, Thai artist Rutchanok... more

Having grown up in the countryside near a Buddhist temple, Thai artist Rutchanok Jinapun paints with inspiration from the times of her childhood. This composition depicts a cute Buddhist novice who has yet to be ordained. Wearing a yellow robe, he holds a bowl for collecting offerings. This delightful subject is painted in a naif style, depicted alongside the trunk of a tree.

You can find our 'happy Giving II' by Rutchanok Jinapun in paintings categories such as Buddhism Paintings, Religious Paintings, People and Portraits Paintings, Spiritual Paintings and Naif Paintings. Enjoy exploring these sections for other Novica treasures.

"I am a Buddhist and I want to pass on my faith by my paintings, in a 'cartoon' version."

"My name is Rutchanok Jiwapun but you can call me Nok. There are four people in my family. I am the first child and I have one younger sister. My parents work in an orchard.

"I am from Lamphang province. My house is in a rural area, about 30 kilometers from the city. My family is middle class and was able send me and my sister to study for a university degree.

"I graduated with a bachelor's degree in business. I like painting but I didn't have the chance to paint when I was young. After college, I worked in a company for about four years and after that I wanted to do something for myself. I started to look for a way to paint and I came up with the idea of depicting the little Buddhist novices, because the theme is brilliant and cute. It is not a complicated painting. According to Buddhism, novices are children who learn about the religion and other subjects in the temple from the time they are young. They must observe the religious precepts, but less so than the monk does.

"I am a Buddhist and I want to pass on my faith by my paintings, in a 'cartoon' version.

"I like to relax. I try not to be serious because, if I think too much, I might create a bad painting. I am a calm person. I don't like busy things. Something that impressed my life is the Buddhist Lent tradition, because there are many people who make merit through their hearts. It is because we have faith in Buddhism.

"I like to work at night until morning, so I have a chance to make merit and see the little Buddhist novices. In Thailand in the early morning, Buddhist monks and novices always go out to receive food or a flower from people who make merit. This scene of the little boys really inspired me to paint. These little novices are so cute and charming, even those who are able to be calm. But because they're still young, the charm of purity and innocence in their personalities cannot be hidden. I found these children to be very inspiring.

"In the future, I want to be better in my work."
View all