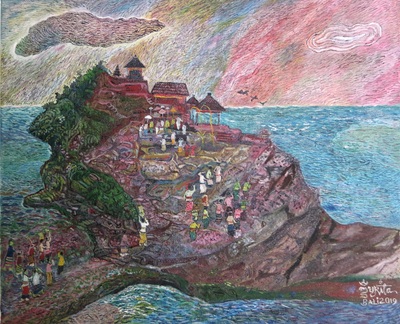 byMade Surita
Located off the coast of Bali, Tanah Lot is a rock formation that is home to an... more

Located off the coast of Bali, Tanah Lot is a rock formation that is home to an ancient temple, making a great tourist destination. Made Surita works in a charming, naif style, capturing the beauty of Tanah Lot as locals make their way up to the temple. He confides "Tanah Lot is a temple in Cape Tanah Lot, one of six temples that are called the Sad Kahyangan, or 'six pillars' of Bali. The temple is always full of people, including Balinese and international travelers."

You can find our 'tanah Lot' (2019) by Made Surita in paintings categories such as Landscape Paintings, Beach Cottage Paintings, Seascapes Paintings, Naif Paintings and Acrylic Paintings. Enjoy exploring these sections for other Novica treasures.

"A style of my own? I discovered it by combining the different existing wayang styles…."

"I was born July 27, 1951 in the village of Payangan. My father, a Hindu official, specialized in painting wayang (puppet) figures. In 1965, after finishing primary school, I started to draw zealously, picturing nature and people with cult functions.

"In 1968 I enrolled at the Sekolah Seni Rupa Indonesia (School of Fine Arts Indonesia, or SMSR) in Denpasar. After two years there, I was able to finance my study through the paintings I was selling. During this period, the artist Nyoman Darsana, also from Payangan, helped me master batik techniques.

"The years between 1971 and 1988 represented a period of doubt for me, a quest for my own soul. From time to time I sought comfort in other occupations and professions, concentrating more on batik, or working as a journalist for various newspapers. In 1988, I eventually discovered my own personal painting style based on Balinese culture.

"A style of my own? I discovered it by combining the different existing wayang styles – the 'Kamasan Klungkung' style and the 'Young Artist' style as it had been developed and taught by the Dutch painter Arie Smit.

"Elements of both styles were subordinated to my own subject matter – the culture of Bali or daily life as it is determined by religion. In my most recent paintings, I link up even more stylistic elements than before. The compositions refer to the 'Young Artist' painting style, the figures and trees to 'Wayang Kulit' (shadow puppet), the colors to 'Wayang Kamasan' and my technical finish to the traditional Ubud style."