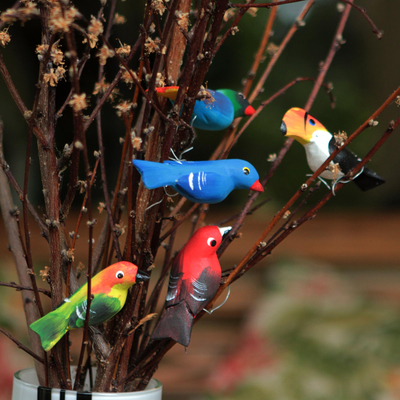 Set of 5 Brazilian Bird Ornaments for Display, "Birds in My Garden"

Carved by hand, five delightful birds celebrate Brazil's wonderful diversity. Raul Vinelli works in pinewood to create this colorful flock. They pose on flexible wire legs that are designed to wrap around the branches of a plant or to stand in a flower pot or dish garden.

These are best on a covered terrace or indoors. Please limit exposure to sun and rain.

Gave as a gift to my mom. Loved the details and colors. They are now spread throughout her plants in the house. Too cute!

These birdies are so cute and colorful. I placed them on a miniature evergreen tree displayed on the base of my flagstone fireplace and they enhance the display. I like them so much that I just ordered the Brazilian Bird Ornaments, Birds in My Garden, by the same artist. I will add them to my tree to add additional color and interest. They are certainly a conversation piece.

These were a gift to cheer my mother up, she put them in random places, mirrors, plants, wherever. They always bring a smile.

I love these, I have them tucked in the blinds to lighten up a dull room.

Not painted as nicely as in the picture, mine has a line differentiating the upper and lower bill, and more black at the end of the bill. Ever seen a Toucan with a bigger lower bill? Because of the line mine has. Also some assembly is required to mount the Toucan to the vine which again is not as pictured, its much thicker and lighter in color than depicted.

I bought two of these, one is in living rom and I am debating whether I should gift the other or hang it!! They are a nice addition to add some Brazilian color and cheer to a room, very well made and colorful. My thanks to Novica and Raul Vinelli !!

You can find our wood ornaments 'Birds in My Garden' (Set of 5) by Raul Vinelli in holiday decor & ornaments categories such as Animal Themed Ornaments and Christmas Ornaments. Enjoy exploring these sections for other Novica treasures.

"I always had a very close relationship with handicrafts. I grew up among the tools of my father's workshop…my brother and I were his main assistants."

"I always had a very close relationship with handicrafts. I grew up among the tools of my father's workshop, where he mounted tropical fish. My brother and I were his main assistants. Over the years, my father began to withdraw from this activity since, to search for fish, he had to make long trips to the interior of the country. This was when I saw a viable opportunity to develop my own artisan activity, and thus I began to continue the family's work – carving tropical birds of wood.

"Once I saw a wooden decorative gull that a friend brought back from a vacation in Porto Seguro. I found it very interesting, but it lacked movement. Inspired by my friend's bird, I created a gull with bendable wings that allowed it to move in the wind.

"To sell my work on the Internet was always a dream of mine. I believe that if people see my birds and wooden objects on the screen, they will certainly be interested. Now these same people and many others in the entire world will have easier access to my products through Novica."
View all