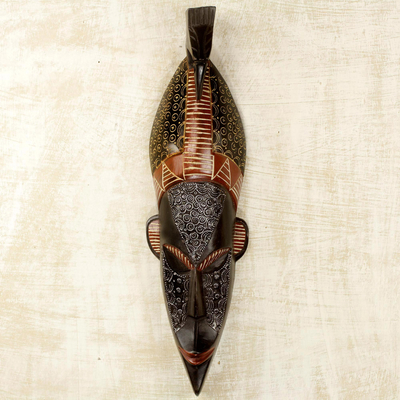 (43)
The stunning design of this original wall mask is by Ghanaian artisan Eric... more

The stunning design of this original wall mask is by Ghanaian artisan Eric Danquah. He crafts the mask by hand, carving it fromsese wood and adorning it with embossed aluminum on the cheeks and forehead. The impressive headdress is centered by a bird looking down, which in Danquah's design represents the legendary Sankofa symbol. One of the most renowned of Adinkra symbols of Akan origin, Sankofa - literally meaning "go back and retrieve it" - invites to reflect on the past to build a better future.

This mask is as beautiful as the picture depicts - even more so. It is very striking, and quite often I will just stop and admire it on the wall. I look forward to building a collection of these beautiful masks.

This mask is so beautiful!! Its really amazing. This mans got skills! The centerpiece of my collection!! Looking forward to my next one!

Love the table, but was delivered with a chip out of one of the elephants leg, so it?s currently hidden away against a wall until I can try and repair it as the light color wood shower starkly.

Thw brave buffalo mask is bold and a sign of strenght in my collection. It is made with grwat care and expertise.

Fit nicely with my other pieces from Ghana!

A Faithful Woman, Modern Wood Sculpture of a Ghanaian Woman

I wasnt sure what to expect - photos can be misleading - I found a beautifully crafted mask and Im delighted with it.

You can find our african wood mask 'Sankofa Invitation' by Eric Danquah in masks categories such as Animal Themed Masks, Ghanaian Masks and Wood Masks. Enjoy exploring these sections for other Novica treasures.

Eric Danquah has received 6 microcredit loans with 0% interest from Kiva and Novica, the first for $1000 and the most recent for $800. Proceeds were used to purchase wood as well as sandpaper, polish and wood stain for increased production.

"We are four children in the family, among which my junior brother and sister are also talented with the skill of carving. My brother helps me a lot…."

“My sister introduced me to carving; she had the opportunity to learn, and it fascinated me---if a woman could carve, then why can’t I also carve? Carvers were not respected back then, because carving wasn't considered valuable.

“I used to see carving all around me, so I wanted to do something else that was different from carving. But I realized I had a passion for carving, so I diverted back. Since I joined Novica, I noticed I have excelled more than my other colleagues. In the beginning, I was into only carving, but now I have introduced bowls and furniture.

“The challenges I have faced were sickness and theft of my art works, but since I am determined to succeed, I don’t give up. ‘Don’t enjoy sleep and be poor’; this was advice I got from my mother. I will soar higher and higher with NOVICA.”

Eric Danquah was born on December 12, 1974. He displayed interest in carving as a young man, and would sometimes go around helping the carvers of his community. However, his mother wanted him to be an electrician, so she sent him to the city to study electronics. Soon enough, Danquah realized that this was not his calling, and he decided to return home to learn the art of carving, for which he had already demonstrated talent.

Says Danquah, "I learned carving from a shop for three years, and later established myself with my own shop. I started carving for a full time profession in the year 1997 at the age of twenty-three, and now have one boy I work with. We are four children in the family, among which my junior brother and sister are also talented with the skill of carving. My brother helps me a lot at the shop."

Sese wood serves as Danquah's primary material, as he uses chisels, gouges, and axes to extract its natural beauty.
View all