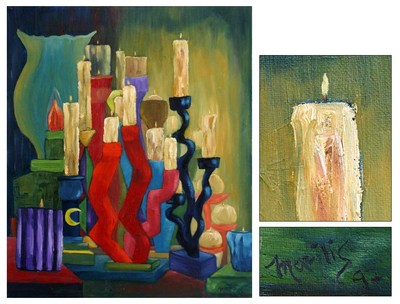 byMarilis Cardenas:
Votive candles, aromatic candles, and ornamental candles are all part of past... more

Votive candles, aromatic candles, and ornamental candles are all part of past Mexican customs and today's home décor accents. Standing on artful candleholders, they lure with their hypnotic flame in a painting by Marilis Cárdenas.

You can find our 'candles and Votives' by Marilis Cardenas in paintings categories such as Spiritual Paintings, Expressionist Paintings and Oil Paintings. Enjoy exploring these sections for other Novica treasures.

"I'm one person with a heritage from two countries. As such, I depict my life, my traditions, my origins and my world in my works."

"I was born in Guadalajara on May 25, the second of seven children. Throughout my childhood, I was influenced by my grandparents. My paternal grandfather was a military man, and my maternal grandfather was Spanish, a physician, who considered himself more Mexican than anyone. One grandmother was Spanish, the other, Mexican. Both were dynamic, decisive women, ahead of their times. Both left a strong impression on me of my roots in two continents.

"As time went by, I fell in love with the arts – pictorial, graphic and sculpture. Art lets me express and create feelings of joy, anger, sorrow, passion, and even death, as though you were reading from the book of my life.

"I received a BA degree in humanities from the University of Guadalajara, but also completed diploma courses in ceramics, fine arts, and prints and lithography. I'm one person with a heritage from two countries. As such, I depict my life, my traditions, my origins and my world in my works."

Marilis Cárdenas has shown her work throughout the region. In addition, she has received awards for her ceramic sculpture, watercolors, paintings and jewelry.