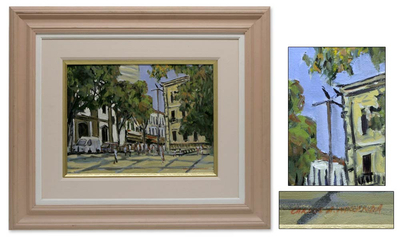 Lured by the Colonial architecture of Rio de Janeiro, Carlos A. Miranda finds inspiration in the church of St. Francis. Built in 1808, it is regarded by many as an architectural treasure. The other building houses the Institute of Philosophy and Social Sciences. Miranda works with oils in a palette of colors that is underscored by gray hues.

You can find our 'largo de Sao Francisco Rio de Janeiro' by Carlos A. Miranda in paintings categories such as Abstract Paintings, Architectural Paintings, Realist Paintings and Oil Paintings. Enjoy exploring these sections for other Novica treasures.

"What fascinates me the most is to feel that I am transmitting the images, sensations and recollections of an observer."

Carlos began to draw human figures at a tender age, wherever he could, including sketching cops and robbers on the cement streets of his neighborhood. Life took him away from the path of art, studying at Rio de Janeiro's university, and working for over 35 years for a major financial firm.

When retirement came, Carlos opted for abandoning computers and calculators as well as market news, and instead taking up the brushes he had left in his past.

As a self-taught artist, Carlos began to experiment with oils. He was a tireless visitor of museums, where he'd observe the use of colors and shadows, styles, and the path of the brush bristles of great artists.

Soon after, he was participating in collective exhibitions and eventually he was preparing solo exhibits, in Brazil as well as abroad. He is proud of the medals and trophies he has received, such as Elisabeth Kinga, Honor for Merit from the International Lion's Club, and he has been honored as Grand Master by the Brazilian Association of Design and Visual Arts. His exhibition on "Gold from Minas Gerais dos Cataguas" at the Military Club received numerous visitors, and he received a trophy from the Military Academy for his paintings of soldiers in the jungles of Serra de Mantiquera.

"What fascinates me the most is to feel that I am transmitting the images, sensations and recollections of an observer," confides Carlos A. Miranda.